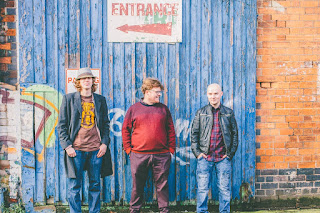 Midlands based progressive-rock band Oktopus have revealed their new, three-piece line-up along with details of their upcoming exciting debut album and forthcoming live performances...

After the recent departure of singer Jane Gillard, the band have decided to forge ahead as a trio with guitarist Alistair Bell taking on lead vocal duties. Samuel C. Roberts (bass) and Tim Wilson (drums and vocals) complete the dynamic make-up of this distinctive act.

Tim Wilson said “Parting company with Jane was a difficult decision, but ultimately we felt a change in direction was important for the growth of the band. She played an important part in laying our foundations and we thank her for her valuable input.”

Later this month, the band will enter Rob Aubrey’s respected Aubitt Studios to begin work on their debut album, Worlds Apart, which will land in early Spring to coincide with their appearance at the HRH Prog Festival and a further three dates supporting District 97 and The Dave Kerzner Band.

The band marry the traditions of progressive music with stellar contemporary musicianship, superb live performance and tongue in cheek humour.