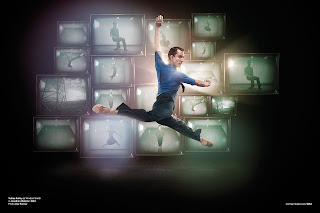 Northern Ballet’s production of 1984 is to be screened on BBC Four at the end of the month...

We've reviewed the book and re-imagined the film over on our sister site at /Garbage-file in the past and now Northern Ballet’s critically acclaimed production of 1984 will be shown on BBC Four after being commissioned by The Space as part of its collaboration with BBC Arts. The new ballet, which premièred in Leeds in early September 2015, was filmed during live performances at Manchester’s Palace Theatre during the first leg of its World Première Tour and will be screened at 7.30pm on 28 February 2016, then subsequently available on BBC iPlayer.

The screening gives new audiences the opportunity to experience the ballet, making the work of Northern Ballet, the widest touring ballet company in the UK, accessible to an even wider audience. Choreographed by Jonathan Watkins and set to an original score by Tony-nominated composer Alex Baranowski, 1984 is ‘the ballet equivalent of a page-turner’ (The Stage). It features the use of cutting-edge digital technology with video designs by Andrezej Goulding, to bring George Orwell’s dystopian vision to life.

The full-length performance features Northern Ballet’s Premier Dancers Tobias Batley and Martha Leebolt in the leading roles of Winston Smith and Julia, with Javier Torres as O’Brien. Northern Ballet’s Artistic Director David Nixon OBE said, ‘We are delighted that BBC Four will be screening 1984. Not only will people be able to enjoy 1984 in the comfort of their own homes on television, but they will also be able to watch it at their convenience on the BBC iPlayer. Northern Ballet already tours more widely than any other ballet company in the UK but unfortunately it is not possible to reach all corners of the country. Opportunities such as this ensure that audiences nationwide will be able to access our work and have the chance to view world-class narrative ballet at its best. Our production of 1984 pushes the boundaries and offers something different to the traditional titles that people may expect from ballet, so we are excited to be able to share this production with new audiences through this collaboration between Northern Ballet, The Space and the BBC.’

Jonathan Watkins, Choreographer of 1984 added ‘I am thrilled to share 1984 and the performances by Northern Ballet’s wonderful dance actors with a wider audience. 1984 is a story that is perhaps more relevant now than ever before and is an ideal production for reaching new audiences and challenging pre-conceived ideas of what ballet is.’

Audiences can see Northern Ballet perform 1984 live in Edinburgh, Southampton and London between March and May 2016. Tickets are on sale now. For tour dates and information on how to book visit northernballet.com/1984.