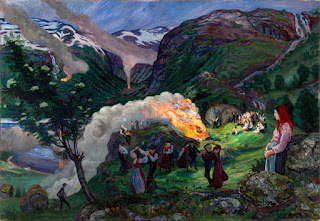 Opening tomorrow at Dulwich Picture Gallery is the first UK exhibition of paintings and prints by Nikolai Astrup (1880-1928), one of Norway’s finest twentieth-century artists...

Along with Edvard Munch, Astrup expanded the artistic possibilities of woodcuts to capture the lush, wild landscapes and traditional way of life of his home in western Norway, powerfully capturing the myths and folklore of the country.

The exhibition brings Astrup’s unique vision of Norway to London. Arranged thematically the show will highlight the artist’s radically innovative approach to landscape painting and printmaking. The parsonage where he grew up and his beautiful farmstead at Sandalstrand (now known as ‘Astruptunet’), along with the lake (Jølstravatnet) that lay between them and the mountains surrounding them inspired a unique and extraordinary body of work. Bringing together a focused display of over 120 oil paintings, woodcuts and archive material, many on public display for the first time, ‘Painting Norway: Nikolai Astrup’ (5 February - 15 May 2016) offers a unique opportunity to discover an artist driven by the desire to create a ‘national style’- something quintessentially Norwegian in feeling and in subject-matter.

Astrup was trained in the painterly naturalist tradition by fellow Norwegians Harriet Backer (1845-1932) and Christian Krohg (1852-1925) in Oslo and Paris but it was during study tours in Europe that he identified the importance of the innocent, untutored eye in recording truth in nature. His exposure to the ‘naïve’ style of Henri ‘le Douanier’ Rousseau (1844–1910) and Maurice Denis (1870–1943) reinforced this conviction and encouraged Astrup to return to his home district of Jølster where he would create his own individual response to the landscape, shaped by the impressions and images remembered from his childhood years.

After welcoming visitors to this beautiful slice of Norway with landscapes providing an almost 360 degree view of the area surrounding his father’s parsonage at Ålhus, the exhibition explores the radical innovations in printmaking and painting that came to define Astrup’s career, highlighting key motifs in his oeuvre, from the distinctive Northern light and atmosphere to the famous Midsummer Eve festival which informed his series of striking bonfire paintings.

Ian A. C. Dejardin, the Sackler Director of Dulwich Picture Gallery and co-curator of the show, said,
“Hailed even as an art student as the great new hope of Norwegian art at the turn of the twentieth century, Astrup deserves to be celebrated outside his native Norway. In painting he rejected the stylistic trickery of aerial perspective, resulting in canvasses of intense immediacy and brightness of colour; in prints he followed his own innovative path, laboriously reworking his woodcuts so that every print is a unique work of art, and – as a final work of art in its own right – he built himself a home, Sandalstrand, on the precipitous shore of the lake that must be one of the most beautiful artists’ homes in the world. A remarkable man, and a great artist – yet this is the first ever show in this country devoted to him. It will be, as we intend all exhibitions at Dulwich Picture Gallery to be, a revelation.” 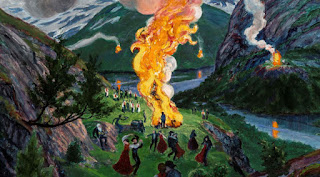 The exhibition opens with the rugged, wild mountainscapes and lake that dominated Astrup’s home village of Ålhus counterbalanced with domestic views of his father’s parsonage, the garden and the farmstead. These works celebrate the specific qualities of the light of the north, notably the midsummer nights, as in the woodcut A Clear Night in June (1905–7), or inclement weather, as in RainyAtmosphere beneath the Trees at Jølster Parsonage (before 1908). A deliberate flattening of the landscape and rejection of aerial perspective in works such asFarmstead in Jølster (1902) illustrate Astrup’s avowed determination to represent both foreground and background with equal intensity.

Printmaking was integral to Astrup’s artistic practice, to which he took a painterly approach, consciously blurring the boundaries between prints and paintings by adding texture and colour with a brush, sometimes all but overpainting his prints. He constantly strove to recapture his intensely-felt experiences of specific combinations of light, shadow and colour at given moments in the ever-changing climate of Jølster as seen in the many-coloured masterpiece A Night in June in the Garden (1909), a print which exists in a variety of impressions, two of which will be on display. This section will also look closely at Astrup’s largest and most ambitious print Foxgloves which, displayed alongside the original oil painting of 1909 will reveal his creative process.

Sandalstrand, the remarkable farm-garden and family home created by Astrup and his wife, Engel looks across the lake to the village of Ålhus. Together they transformed a barely habitable place into a richly planted oasis that came to embody Astrup’s personal vision of what a farm garden in Jølster could be. The result proved to be not only the most distinctive and important artist’s garden in Norway, but also a significant example of a garden used as an integral part of its artist-maker’s creative practice. It provided him with many artistic motifs which became the subjects of his paintings and prints such as Rhubarb (1911) andSpring in Jølster (1925). Fruits and flowers from the garden were also used to decorate the interior of the farm and to create his ‘interior still lifes’; examples on display include Interior Still Life: Living Room at Sandalstrand (c.1921).

The childhood sense of the landscape as a magical place of potential transformation emerges in many of Astrup’s works. In Grain Poles he evokes an army of trolls in painting the characteristic grain poles of rural Norway, making the likeness explicit with the suggestion of a face. Similar motifs appear elsewhere in his work, most obviously in the ‘troll’ tree and ‘Ice Queen’ mountain of Spring Night and Willow (1917). The final room in the exhibition also brings to London the most striking of all Norway’s festivals, Midsummer Eve, which Astrup painted with great intensity. His memories of watching the festivities as a child informed works such as Midsummer Eve Bonfire (1915) where couples whirl, dancing to the music of a fiddler. Blended with the great wafts of smoke and luminous flames, Astrup’s dazzling prints and paintings of the celebrations were to become arguably his most famous works.


The exhibition is co-curated by The Sackler Director of Dulwich Picture Gallery, Ian A. C. Dejardin, MaryAnne Stevens, independent art historian, curator and consultant, and previously Director of Academic Affairs at The Royal Academy of Arts, and Frances Carey, independent curator and consultant, who was formerly Head of National Programmes, and before that Deputy Keeper of Prints and Drawings, at the British Museum.

Loans have been secured from a number of lenders from Norway including Astruptunet, Sogn og Fjordane Kunstmuseum (MISF); KODE, Bergen; The National Museum of Art, Architecture and Design, Oslo and The Savings Bank Foundation DNB as well as a number of private collections in Norway and the United States of America.

With Scala Arts and Heritage Publishing, Dulwich will produce a fully illustrated colour catalogue to accompany the exhibition. Exhibition co-curators Ian A C Dejardin, MaryAnne Stevens and Frances Carey explore the artist’s remarkable life including his place within the context of contemporary European art and the innovative quality of his printmaking.

Find out about other associated events at Dulwich Picture Gallery website.
Email ThisBlogThis!Share to TwitterShare to Facebook