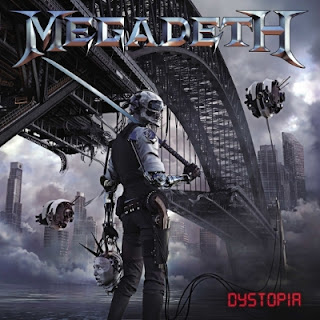 Thirty years into a groundbreaking career, Megadeth return to take the no. 3 spot on the Billboard Top 200 chart alongside Adele and Justin Bieber...

Always a global band, Megadeth's domination was felt overseas as well, with top 10 debuts in Japan (no. 2 international chart), Finland (no. 3), Canada (no. 3), Mexico (no. 4), and Australia (no. 6), as well as Belgium, Ireland, and Australia achieving the band's highest chart positions ever. Other countries with significant sales or chart debuts include UK, Norway, Sweden, Italy, Netherlands, and France.

Rock critics and fans around the world are hailing Dystopia as a triumphant return from one of the most important bands in the genre.  Featuring 11 tracks, Dystopia (Universal Music Enterprises /Tradecraft / T-Boy Records) was released January 22 on CD, LP, and digitally. A special edition is also available featuring a groundbreaking Virtual Reality experience, which includes the new album, a CEEK Virtual Reality headset and a download code to unlock exclusive content.

With musical architect and band visionary Dave Mustaine at the helm, Dystopia was recorded in Nashville, TN, and mixed by Josh Wilbur (Lamb of God, Gojira, Avenged Sevenfold). The Megadeth lineup is comprised of new member Kiko Loureiro (formerly of Angra), David Ellefson on bass, and drummer Chris Adler, who took time away from Lamb of God to record with Megadeth.

Recently, Megadeth announced the details of their Dystopia World Tour, which kicks off in Dallas, TX on February 20, 2016 and heads for the UK with a visit to the Download Festival at Donington on June 11th. For more information, go to www.megadeth.com.