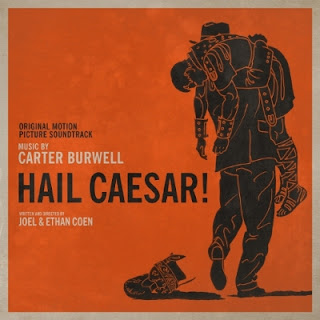 The soundtrack album for the Coen Brothers film Hail, Caesar! comes out tomorrow...

Back Lot Music will release the soundtrack album for Hail, Caesar!, the new film from four-time Academy Award®-winning filmmakers Joel & Ethan Coen on February 5. The soundtrack includes new music by Academy Award®-nominated composer Carter Burwell, as well as songs featured in the new comedy. It's also coming out in vinyl later this month.

Hail, Caesar! marks the Coen Brothers 16th collaboration with composer Carter Burwell. Prior collaborations include Blood Simple, Raising Arizona, Miller's Crossing, Barton Fink, The Hudsucker Proxy, Fargo, Intolerable Cruelty, The Ladykillers, No Country for Old Men, Burn After Reading, A Serious Man and True Grit. Discussing his work on Hail, Caesar!, Burwell says: "The challenge and the fun of composing the score to Hail, Caesar! is that the it contains scenes from many films-in-the-making, and each of those was scored in a manner authentic to the period— basically MGM in the 1950s. There is an Esther Williams water ballet, a Hopalong Cassidy Western, a Roman Christ epic, and all of these are subsumed by a kidnapping mystery, which is itself subsumed by a studio executive's crisis of faith. Melodies are shared between these bits of bright cloth to tie them together into a whole, and some of the recording was even done on the same stage where the MGM classics were recorded."

Burwell has composed the music for more than 80 feature films and received his first Oscar® nomination for Best Original Score for Carol. He was also nominated for a Golden Globe and Critics' Choice Movie Award forCarol. He received an Annie Nomination for Outstanding Achievement, Music in an Animated Feature Production for the stop-motion film Anomalisa. Other award highlights include O Brother, Where Art Thou? (BAFTA Nominee for Film Music) and Where the Wild Things Are (Golden Globe Nominee for Best Original Score).

Other recent projects for Burwell include the mystery drama Mr. Holmes and the ocean thriller The Finest Hours. Burwell has taught and lectured at The Sundance Institute, New York University, Columbia Universityand Harvard University.

When the world's biggest star vanishes and his captors demand an enormous ransom for his safe return, it will take the power of Hollywood's biggest names to solve the mystery of his disappearance. Bringing the audience along for a comic whodunit that pulls back the curtain and showcases the unexpected humor and industry drama found behind the scenes, Hail, Caesar! marks the Coens at their most inventive.

The comedy is produced by Joel and Ethan Coen through their Mike Zoss Productions, alongside Working Title Films' Tim Bevan and Eric Fellner (The Theory of Everything, Les Misérables), who have partnered with the brothers since their Academy Award®-winning Fargo.

Listen to Channing Tatum sing No Dames in this clip...

Track List (all tracks by Carter Burwell, unless otherwise noted):

Pre-order the album: on iTunes