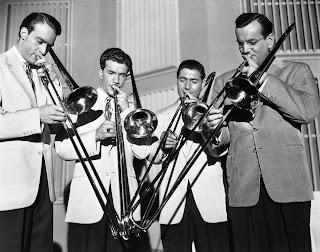 Are you In the Mood for some Glenn Miller news...

You may have heard about the rebound of vinyl records. But those records are not just the long play 33 rpm and single play 45 rpm discs we know from the past. Right until the late 1950s, records spun at a much higher speed – at 78 revolutions per minute allowing only a few minutes of music on a 10 inch record. Most modern record players can't even play the old 78s, but there's a world wide and vibrant community that cherishes, collects and plays these gems.

Those folks will soon have something new to spin on their players and in their jukeboxes. Rollofone Records have announced that it will release a set of 5 records with 10 of the most famous tunes by Glenn Miller and his orchestra – on proper 78rpm vinyl. Company officials underlined the fact that the music has been taken and remastered from the original metal archive records, which are safely stored in vaults at RCA (now Sony) music.

"We received tremendous support from Sony," Michaela Merz, Rollofone's owner and sound engineer said. "Without their support, this wouldn't have been possible."

Even the Glenn Miller family has endorsed the project:

"My father has brought joy and happiness to many people around the world. Thousands and thousands listened to his music, on the radio, playing in jukeboxes or on record players at home. [...] This record collection has been lovingly created by Michaela Merz and her Rollofone team to bring the wonderful Glenn Miller sound back to where it belongs: to jukeboxes and record players." - reads part of a statement on Rollofone's web site.

"Though the targeted market is small and the production release limited, almost half of the record sets have already been sold," says Mrs. Merz. 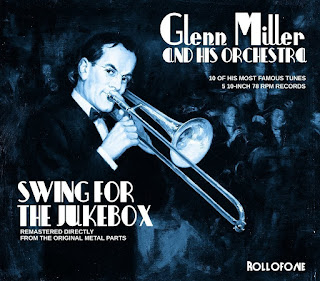 Images and Info - Rollofone.
Email ThisBlogThis!Share to TwitterShare to Facebook