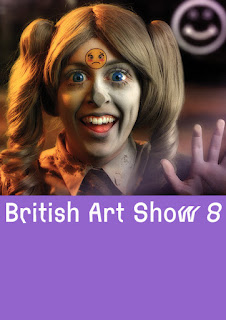 The British Art Show is a touring exhibition which takes place every five years and provides an overview of some of the most significant contemporary art produced in the UK. This one, British Art Show 8, is being hosted across three galleries in Edinburgh: Scottish National Gallery of Modern Art (Modern One); Inverleith House at the Royal Botanic Garden and Talbot Rice Gallery at the University of Edinburgh and will be accompanied by a programme of public events, including artist talks and discussion-led tours.

The whole show has been put together by two external curators, Anna Colin and Lydia Yee, and features the work of 42 artists who are each considered to be making an important contribution to art in this country. The result is a wide-ranging exhibition that encompasses sculpture, film, video-installation, photography, print-making, painting, performance and design.

For this, the second stage of the exhibition’s tour, having already been to Leeds and subsequently heading for Norwich and Southampton, major new artworks are being hosted by each of the three venues, including Adam Broomberg & Oliver Chanarin’s monumental installation, Dodo, 2014, being shown in the UK for the first time at Modern One.

A central theme of British Art Show 8, according to the curators "explores artists’ engagement with the material world at a time of increasing convergence between the real and virtual spheres." This means that objects are considered "as active agents, generative entities, mutating forms and networked realities, rather than being simply defined by their properties (what they are made of) or their effects (what they tell us)." While some artists, such as Aaron Angel, Linder or Stuart Whipps, revisit traditional craft-based skills or make use of industrial techniques, others, including Imogen Stidworthy or Yuri Pattison use digital material as a starting point for their work. Throughout the three-part exhibition, ordinary objects – for example, a child’s toy, a hard drive or an egg – are considered as archaeological finds or narrative devices capable of revealing new ways of interacting with the world.

Find out more about the exhibition and get involved in the debate at britishartshow8.com