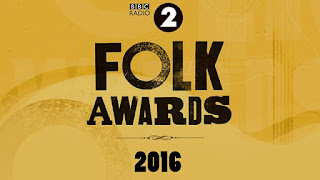 This year’s BBC Radio 2 Folk Awards are confirmed to return on Wednesday 27 April 2016 and will be held at the prestigious Royal Albert Hall in London...

Announced by Radio 2 Folk Show presenter Mark Radcliffe on the Radio 2 Drivetime show (weekdays, 5-7pm), this is the Award’s 17th year and will see some of the biggest stars in the folk music scene take to the stage for an evening of celebrations. The event will see live performances from British singer-songwriter and multi-award-winning Joan Armatrading, Mercury Award-nominated Sam Lee, and acclaimed Northumbrian folk act The Unthanks. Other acts on the line-up will be announced at a later date.

Bob Shennan, Director of BBC Music, and Controller BBC Radio 2, 6 Music and Asian Network, said, “The BBC Folk Awards is one of the great highlights of the Radio 2 calendar, with the event itself and the folk music genre remaining hugely popular with our audience. This is the perfect chance to celebrate and recognise outstanding talent from the world of folk, and I am looking forward to being back at the Royal Albert Hall.”

Mark Radcliffe, presenter of the Radio 2 Folk Show, added “Every year I wonder how we can top the last, but with these remarkable artists confirmed to perform and more to be announced, I know it’s set to be another fantastic evening. Bringing the event live from the Royal Albert Hall to the Radio 2 listeners, which has staged so many folk legends and moments over the years, makes it all the more special.”

Three times Grammy-nominated, two times Brit-nominated, winner of a coveted Ivor Novello Award, and winner of the Gold Badge Award, Joan Armatrading MBE has come a long way since her birth in the West Indies and her upbringing in Birmingham. Known as a true craftsman, her distinctive vocals and consummate musicianship have led to unanimous, widespread and critical acclaim. Spicing her take on folk with elements of rock, blues, and jazz, Armatrading has had a remarkably long and consistent career, and is the first ever female UK artist to be nominated for a Grammy Award. Her hit records include Love & Affection, Me Myself I, and Drop The Pilot, and in 2015, Armatrading completed her last major world tour.

Since bursting onto the folk scene at the end of the 1990s, Sam Lee has blazed a dizzying trail as an outstanding singer and song collector, but also as the driving force behind the eclectic, award-winning folk club The Nest Collective, which has brought traditional music to all kinds of new stages and venues. Lee may be a 21st-century artist, collecting new versions of old songs on his phone and laptop, but his repertoire is steeped in the reek and smoke of folk history and lore. Awarded the prestigious 2011 Arts Foundation prize and nominated for the 2012 Mercury Award for his debut album, Ground Of Its Own, Lee’s most recent album, The Fade In Time, was released in 2015. Sam has taken his music worldwide to more than 20 countries, most recently the US and Japan.

The Unthanks, acclaimed Northumbrian folk act featuring sisters Rachel and Becky Unthank, were nominated for the Mercury Music Prize in 2008, and their album The Bairns was nominated for the Best Album award at the BBC Radio 2 Folk Awards in 2008. Using the traditional music of the North East of England as a starting point, the influence of Steve Reich, Miles Davis, Sufjan Stevens, Robert Wyatt, Antony and The Johnsons, King Crimson and Tom Waits can be heard in the band’s eight albums to date, including Mount The Air, released to huge critical acclaim last year.

The event will also feature the Radio 2 Folk Awards Hall of Fame for the third year running. The Hall of Fame exists to recognise the special contribution of an individual to the world of folk music - someone whose impact and influence has had a lasting impression. This year’s inductee will be Sandy Denny - considered to be a founder of the British folk rock movement and perhaps its most important female singer, songwriter and personality. Over a brief career spanning just 13 years, Denny left an extensive legacy. She is remembered for her pivotal involvement with the British folk rock scene, where, as a member of Fairport Convention, she moved the band away from west coast American cover versions and into performing traditional material and original compositions. Sandy Denny is also remembered as a composer, most notably on her solo albums which represent her claim to be Britain’s finest female singer-songwriter. Her composition, Who Knows Where the Time Goes, is now regarded as a classic and has been recorded by artists as diverse as Judy Collins, Nina Simone and Cat Power. Famous also for her exceptional voice, it has been suggested that her effortless and smooth vocal delivery still sets the standard for many of today’s female folk-based singers.

Nominees for the Folk Award categories will be announced by Mark Radcliffe in the Radio 2 Folk Show this Wednesday (10 February, 7-8pm). The categories include: Folk Singer of the Year, Best Duo, Best Group, Best Album, Horizon Award, Musician of the Year, Best Original Track, Best Traditional Track and BBC Radio 2 Young Folk Award. The awards show will also include the presentation of Lifetime Achievement Award - the recipients of these will be announced at a later date.