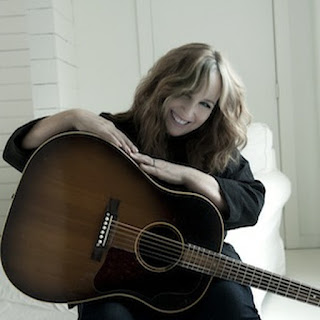 If there’s a better song about how a person’s absence can last forever than ‘A Bus To St Cloud’ then I don’t know what it is. If there’s a better song about modern America than ‘Idlewild’ then please point me in its direction. The list of songs that tug at the heartstrings is a long one. And it never feels like you’re being emotionally manipulated. Part of Gretchen Peter’s appeal, especially live like this, is that she seems such a genuine person. To use a terrible word she’s nice.

This gig is part of her 20th Anniversary Tour. Apparently when her first album came out twenty years ago it was the UK that seemed to like it the most. She played then in front of small crowds but now she fills the Union Chapel in Islington, which by-and-by is one of the loveliest venues I know for seeing live music in. I have seen Gretchen Peters six times now since stumbling across her at the Cambridge Folk Festival so I’m not an entirely unbiased reviewer here. Ever since I first heard her sing ‘Guadalupe’ (which she wrote with & performed with Tom Russell on ‘One To the Heart, One to the Head’) I was a fan. There’s a couple of lines in that song – “I am the least of all your pilgrims here/But I am the most in need of hope” – which seemed to really hit home then (and now).

Peters has just released The Essential Gretchen Peters, which is both a best of and an alternative/lost cuts double album, which I’d recommend as a starting point. Peters is labelled as a country artist, which in Britain often comes weighed down with images of red-necks in cowboy hats twanging terrible songs but actually, to me, is packed full of great singers and fabulous songs. Country is where a lot of the great sad songs lurk unlistened to by the British public. There’s also some great songs about drinking in there and living. It’s built of the traditions of Anglo-Celtic folk music. Yes, it can be as cheesy as hell and a bit to filled with God for a British audience but at its best Country music can really break a heart.

And Peters is the best.

Her live gigs are intimate, friendly and fun. She’s a self-depreciating but self-confident presence. Backed up by Conor McCrean, Colm McClean and her husband, Barry Walsh the band are technically and emotionally perfect. (One of the pleasures of a Gretchen Peter’s gig btw is her relationship with Barry Walsh. It’s funny and sweet, without being twee.)

She played a lot of songs from both ‘Hello Cruel World’, which was released in 2012, including Matador, Five Minutes, Woman on a Wheel and Hello Cruel World itself. Then there were tracks from 2015’s ‘Blackbird’, including Everything Falls Away, When All You’ve Got is A Hammer & Blackbird itself, which is a darkly beautiful little song.) But she also dipped in and out of her back catalogue, including ‘Love & Texaco’ (which I’d never heard before & utterly blew my tiny little mind) and covered – if playing a song you co-wrote with Bryan Adams counts as a cover – ‘When You Love Someone’. Peters’ version of ‘When You Love Someone’ is an Everly Brothers style gem. Very different to Bryan Adams’s version, which is want I want in a cover version to be honest.

The truth is the whole gig was magnificent and if you get a chance to see her live you should. I’ll definitely be going again when I get the chance.