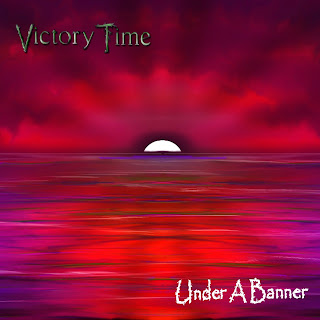 Lizzie Parker gives her verdict on the EP Victory Time from Under A Banner...

I must admit, when my friend Steve gave me this EP to review, I hadn’t actually heard of the band Under A Banner but I guess that’s because I’m not part of any social networking and live in a different part of the country from where the band are based. Steve assured me though that they are very well known both on Facebook and Twitter, as well as on the festival circuit and that, with my taste for folk, rock and Celtic music, I would enjoy what I heard so I sat down to listen to the five tracks that make up Victory Time.

The first track, The Network, took me right back to my college days and the sound of the protest song, although this one is anti-technology more than anti-fascist. Very reminiscent of bands like The Men They Couldn’t Hang, this song has a very lyrical quality to its anger both in words and music, making it a memorable opener for the EP, and the guitar in it is simply sublime.

The second track is the title track itself, Victory Time. I love love LOVE the “plinky” introduction to this, with the keyboards evoking all sorts of memories of summers at the funfair for some reason. You’ll need to hear it to see what I mean [watch the video for it at the bottom of the page - Ed]. As the song goes on, it becomes much more of an “end of the night” type song with a rousing chorus that I can see working as a rowdy crowd chant at festivals.

Leaving Here is another buoyant track, despite the melancholy sound of the title, and the vocal harmonies on it are stunning. I also really enjoyed the almost prog rock sound of the keyboards on this one, which shows my age and is quite a difference from the sound of Victory Time, which shows the diversity of the band very well.

Summer Skies is redolent of summer festivals, especially with the singable chorus. The highly complex sounding drums in this were really impressive and would sound brilliant in the open air.

Finally we have Magic is Real and the snare drum intro and the melody, which sounds almost like it could have been played on the Uilleann pipes, both give this a very Irish Celtic, vaguely military feel to the start of this again very upbeat rhythm. Having said that though, the rhythm of the vocals, although again harmonically tight and very well sung, being so totally different to the instrumental sections, I find they jar a bit for me which is a pity.

Having listened to, and really enjoyed, the whole EP, out of interest I went looking for some more of their music on YouTube. Wow! Their live sound is completely different to the studio produced songs but this is not a bad thing, far from it. Whereas the studio sound is tight, polished and incredibly professional, highlighting the music and the lyrics in equal measure, their live sound is much heavier, almost punky in bits with a rawer, less polished edge although they still play very, very well together. Think early Drop Kick Murphys and you have the idea. Their live sound is definitely a festival sound, very atmospheric and very listenable too and I would like to suggest that they make a live album at some point because I think it would really work.

Why this band is not on everyone’s ipod playlist I don’t know - Under A Banner need to be heard much more widely. Having investigated their back catalogue more fully now, thanks to their Bandcamp pages and YouTube, there is something for everyone, from melodic and melancholy acoustic music to strident, amp shattering rock, all spotlighting the meaningful lyrics of each song, and the meltingly beautiful voice of singer Adam Broadhurst. Steve tells me that Under A Banner now have a third album planned for this year and I’m excited to hear more new music from them.

Image - Under A Banner

Find all of Under A Banner's music on Bandcamp