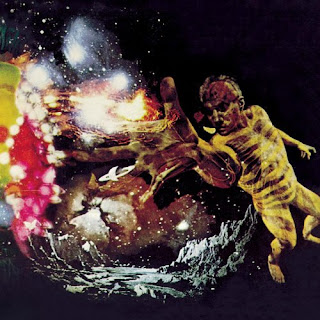 Hearing that Santana IV is on the cards set Susan Omand looking back through her record collection for Santana III...

The year was 1971 when Santana III, the third studio album from Santana (funnily enough) was released on the world. I was also three, had not yet been released on much of the world past the shop at the end of the road and hadn’t quite graduated yet from the Larry the Lamb stories in my record collection (yes, I still have that record too). However, fast forward about 14 years and I got introduced by my then boyfriend to the Latin/African rhythm fusion and enviable guitar playing of Carlos Santana and I was hooked (for a while anyway until I got dumped by the bloke in question, however I kept his record collection, so nyah).

Santana has definitely got a “sound” and I can understand that, apart from the ubiquitous Black Magic Woman that everyone knows but which is actually a cover version of a Fleetwood Mac song the year before, it’s an acquired taste that can be quite difficult to acquire. Talking of sound, I need to mention that I only have Santana III on vinyl, from the aforementioned inherited collection, so am ignoring the scratchy bits as I listen to the album again.

"Batuka," an instrumental, is the first track on the album and we’re straight into an almost disco vibe with the conga percussion, as the Latin rhythm is very evident, and the wah wah guitar and almost prog rock keyboards also serve to date the piece as being very 70's. I also discover that, as the music kicks in after the percussive intro, it hits exactly the same first chord as Black Magic Woman, so much so that I forgot which album it was and expected them to launch into the Peter Green song that they made famous. However, as the instrumental finishes it leads seamlessly into "No One to Depend On" and the beat slows down, hitting a much smoother beat. The lyrics aren’t that adventurous but, to be honest, as with all Santana albums, the singing is pretty much secondary to the music itself. The guitar solo is sublime and timeless as Neal Schon, amazingly only 17 at the time the album was released, shows virtuosity beyond his years in addition to the masterful playing of Santana himself.

"Taboo" is next with another change of pace and indeed sound as the latin rhythms aren’t nearly so pronounced in the introduction, until a slow samba beat kicks in. This is definitely a late night track, with some storming guitar solos and it doesn’t sound nearly as “of its time” as the others because of that.

Although the title of "Toussaint L'Ouverture" is French (and the name of a historical Haitian military leader), the sound most definitely isn’t as we’re back among the strong Latino influences. I must admit that the keyboard solos on this track, by Gregg Rolie, are almost more impressive than the guitarwork of Santana and Schon.

Another very upbeat track is next, and one of the two singles that came off the album, "Everybody's Everything" has a real music festival over-indulgent feel to it. Until the guitar kicks in, it sounds very like a James Brown track and, believe me, that is not a good thing, but I guess it’s what was commercially successful at the time, therefore being an obvious choice for a single release.

"Guajira" sees us back in the heat of Latin American nights, complete with Spanish lyrics. However you really don’t need to know what the song means as the voice is just another instrumental layer. Rolie’s keyboards get to show off again in this big style and there’s a real jazz feel as the instruments, piano, brass and guitar, wander over each other, sticking only loosely to the main tune in another indulgent bridge.

"Jungle Strut" is another instrumental, giving everyone more chance to go off and do their own thing in the same place at the same time over a Latin beat. I may be getting a bit bored of it now.

However, things pick up again with "Everything's Coming Our Way" is the other single off the album and much tighter and more commercial sounding than the previous few tracks. Again it’s understandable why this was chosen as a single.

"Para los Rumberos" is the last track on the original album, although the remixes and re-releases have bonus tracks on them. And it’s a brassy and brash way to finish up an album that is pretty much how I remember it to be. Having listened to the whole album again, I also remembered why I found it very difficult to stay focussed on the music for the full forty minutes and it turned out to be nothing at all to do with the bloke in question at the time. Technically brilliant virtuoso guitar playing it may be but, after 20 minutes or so, Santana all starts to sound very much the same, self-indulgence sped up or slowed down. Forty five years after its first release though (ulp) and there’s only a couple of months to wait for Santana IV with, after many changes in personnel, the original line-up from Santana III back together again. Will I buy it? I’m really not sure that my record collection or sanity could stand it, although I see that it will be coming out on vinyl as well as other formats. But I’ll certainly give at least some of it a listen to see if the “sound” is still the same, just for old times’ sake.