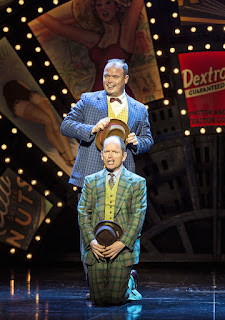 Tony Cross rolled the dice at The Oldest Established (Permanent Floating Crap Game) but did he find Luck was a Lady as he watched Guys & Dolls at the Savoy Theatre...

Let's not beat about the bush, this is marvellous, which is annoying because it is so much easier to write reviews of things you loathe. Snark is easy, praise is hard.

I have seen Guys & Dolls once before live & I have seen the Sinatra-Brando-Simmons-Blaine film, which probably makes it the musical I am most familiar with. If you don't count The Doctor Who Stage Play. Which you don't. Clearly.

I've liked what I've seen before but this production was bloody brilliant. I'd go and see it again tomorrow if I could get a ticket.

Why? Well, I like the plot, which actually feels a bit like one of Shakespeare's comedies. The man trying to avoid getting married to the women who loves him despite his marriage avoidance and the ill-matched pair that fall in love against all expectations. But not before one or two mix-ups. The course of true love cannot run smoothly for if it did where would all the drama be?

My friend Carrie, who I went to see this with, is a woman who loves happy endings. Me, I'm a sucker for misery. I like sad songs and sad endings. As Gretchen Peters - a rather brilliant singer-songwriter - once said at a gig of hers I attended, "We like the sad songs.' So I'm often against enforced jollity and happy endings. But occasionally I'll make an exception for something and Guys & Dolls is one of those.

Sophie Thompson and David Haig play Miss Adelaide and Nathan Detroit. They're excellent. They've got comic timing to die for but they're also good at the serious stuff when its needed.

Poor Miss Adelaide. Engaged for fourteen years to Nathan Detroit and never yet married. She's resorted to telling her mother lies by letter. Adelaide laments a lot. The thing is you always feel that Nathan really loves her but just can't bring himself to finally do the right thing. It's like he see marriage as the end of his fun. Haig & Thompson do a rather lovely version of Sue Me. And Adelaide's Lament is both sweet & funny.

Jamie Parker and Siubhan Harrison are Sky Masterson and Sarah Brown : the bad boy and the good woman. Although you always get the impression Sky's trying too hard. He's clearly a nice bloke as he can't bring himself to take advantage of Sarah when the chance arises. Both Parker and Harrison are brilliant. I loved Parker's version of Luck Be A Lady and Harrison's If I Were A Bell (which by the by has a couple of odd lines in it.) 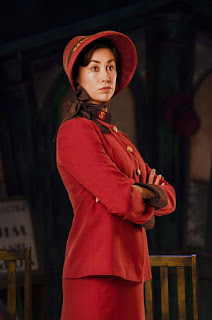 And Siubhan Harrison is a Mission Doll. The Mission Doll - to mangle a Raymond Chandler quote - to make a bishop kick a hole in a stained glass window. She's really good.

But I can't think of a single dud in the whole cast. Gavin Spokes as Nicely-Nicely Johnson does a great job and the version of Sit Down Your Rockin' the Boat is stonkingly brilliant. It's the shows party piece really, even if Havana is where all the action is supposed to be. Sit Down You're Rockin' The Boat is the song I've found myself singing most since seeing this, although Sue Me (the male bit) is a close second. Indeed I've come dangerously close to thinking I can sing, which as those who know me will know is utterly delusional.

So massive applause for Spokes. And Ian Hughes. And Neil McCaul. And the whole darn cast, although for the sake of some quibbling I'm going to note some very ahistorical facial hair from some of the chaps. I've really only put that in to avoid this being a total gushathon.

When I was a kid I knew how good a film was by how much I wanted to be in it. So, as my Mum reminded me recently, I saw Star Wars in 1977 with my Dad and brother and when she came to collect us we were pretending to fight with light sabres (which is an insight into one of the many reasons I love my Dad btw. There are more important reasons but the ability to pretend to be a Jedi Knight when your kids need you to be isn't a bad thing to be.) But coming back from that digression the really great stuff I like always makes me want to be part of it. I want to be The Doctor (or a companion if needs must. ;-) in Doctor Who, I want to be Indiana Jones or Han Solo or Vila from Blake's 7*. They made me want to be the hero and the best thing about this production of Guys & Dolls is it made me feel that kind of joyous, childish enthusiasm again. And that can't be a bad thing can it?


*Yes, Vila doesn't fit well into that company but for me Vila was the real hero of Blake's 7. So sue me. Sue me. Put bullets through me...Sorry.

Tony saw Guys & Dolls at the Savoy Theatre. On until 12th March, tickets available from here.

First published on Sound of Musicals.
Email ThisBlogThis!Share to TwitterShare to Facebook