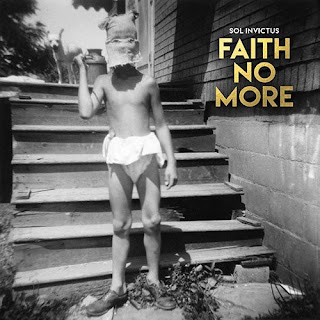 Faith no More. One of those bands I often go back and listen to a lot, although nothing later than Angel Dust which I genuinely consider their finest release. Then I get an iTunes voucher for Christmas and can't find anything I want to purchase. I spend days searching but nothing pops out and grabs me by the throat. That is until I accidentally open an email in my spam folder, something I never do, and see Sol Invictus on special offer. Okay, I think to myself, let's see how the band have changed since 1992. 1992? Has it really been that long? Have I disregarded an old favourite band for two decades? I know, I'll pretend I haven't. Nope can't do that. Let's look at this scientifically and pretend it's been my plan all along to wait 24 years to compare some material.

I really shouldn't have waited. From the opening note of the opening title song I'm hooked back into that early 90's musical frame of mind again. Track 2 is Superhero, a song friends have been telling me to listen to for what feels like ages and is a five minute epic (pun intended) tune that has everything I love Faith No More for. Dark piano, hooky over strummed bass lines, flam after flam drumming you only find on a FNM record and of course Mike Patton doing what only his manic vocal range allows, almost thrash, almost pop, almost operatic all in a couple of lines? Possibly the most perfect FNM song ever and I'm only at track 2!

How do even try to follow up Superhero? Well you put Sunny Side Up at 3. A complete change of style. Very jazzy for a rock tune and vocally reminiscent of Huey from Fun Lovin Criminals at the start before going full on Patton for a bit. Musically it shows a band of talented musicians that have matured into very accomplished performers that bring magic to some very bizarre lyrics:

Rainbows will bend for me
Curvy
Honey bees will sting for me
Stingin', stingin'

that stands up against the more familiar FNM back catalogue with any song you choose. Track 4 sees a more FNM relatable intro with that pounding bass and Separation Anxiety, whilst probably not for everyone, gave me the same chills I got listening to Crack Hitler or Midlife Crisis all those years ago. Cone of Shame is next up and is FNM and more, dare I say, Nick Cave? Certainly not a memorable or distinctive FNM tune but a welcome change of both style and pace at the start with some usual hooks in the middle of the song ending with a heavier early 80's feel.

The second half of the album kicks off with Rise of the Fall which as a drummer and fan of Mike Bordin starts with his obvious snare sound but adds in some very entertaining side claps and rim shots before becoming a proper heavyweight song with Patton's screaming style making a definite appearance. Definitely a track I'd love to see live, with many stylistic changes. Track 7, Black Friday, has an almost Western feel to the music interspersed with some short heavy moments and is lyrically quite brilliant with

"Black Friday's come 'n gone
Buy me a future regret
A shrink wrapped fantasy, that I'll wanna forget
In the age of the mercenary
In the nursing home where river swallows the sea
That's where we'll be, with guns"

stand out amongst some fantastic writing.

Motherfucker starts with some strange sound effects and very dark piano below some wonderful poetry style vocals and has some great Patton moments that flick between spoken to actual fantastic singing and well held notes. A strange yet brilliant listen that would have worked on any FNM album. Matador pops up at 9 and is the first track I get to mention Roddy Bottum's obvious skill on a piano as he does a lot more in the background than his usual notes for effect, he actually plays some beautiful licks underneath all that goes on over the top. Billy Gould's bass really shines in some sections and the tune really grows after a few listens. Again probably not to everyone's taste but it certainly makes for a great listening experience for me. Rounding off the ten track release is From the Dead which starts more acoustically than any other track and had it not been for Mike Patton's vocals you wouldn't know it was a FNM song which shows the bands ability to still surprise its audience and a pleasant surprise it really is.

So has much changed since 1992? Well no not really and I'm really glad. Mike Patton is still vocally challenging himself and a pleasure to listen to whilst writing lyrics only he can pull off. The familiar bass and drums is all there, the moody piano is prominent and all in all its a great album. It's not quite Angel Dust brilliant but it's certainly worth a listen. You won't beat Superhero as a song for a long time though. Utterly sublime tune in a list of great songs.