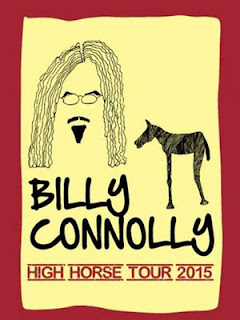 Barnaby Eaton-Jones gets off his high horse about Billy Connolly's stand-up comedy as he watches the High Horse Tour 2016 in London...

Here's the thing, I went to this show on a 'bucket list' ticket for my wife. She loves Billy Connolly. Me? I love him on chat shows, his documentary guides to countries and his irreverent and honest take on life. Plus, I actually think he's a really good actor too and I wish I was as ruggedly hirsute as he is. But, his stand-up? I've no idea why it never tickled my funny bones as much as I felt it should but it always seemed like a lot of waving-his-fist shouting and swearing-as-punctuation.

You know, sometimes it's very, very easy to be proved totally and utterly wrong.

The house lights dim at 8:00pm over Hammersmith Apollo's sold out crowd, who are such an amazing variety of ages and personalities – from buttoned-up chartered accountants to hairy bikers, with teenagers and grandparents thrown in for good measure. The roar that goes up when Billy shuffles on to the stage in his 'uniform' of black leggings, Doc Martens with bright laces, black 'tailcoat' t-shirt and long, flowing hair is an emotional one. Suffering now from Parkinson's, he's not the energetic, manic presence you've come to expect. He's slightly stooped and, although he does make a few forays into mime and movement, he pretty much stays rooted to the spot and feels like there's an invisible cage around him that he's aching to break free of. Typically, it's one of the first gags he cracks as he calms down the applause with his first line: “You're only doing that because I'm not a well man.”

He goes on to explain and explore Parkinson's (“I wish Parkinson had kept it for himself.”) in a hilarious and poignant way, especially with an absolutely tear-inducingly funny anecdote about the actor Ian Holm (Bilbo Baggins, in Peter Jackson's 'Lord Of The Rings' trilogy), who also suffers from Parkinson's. 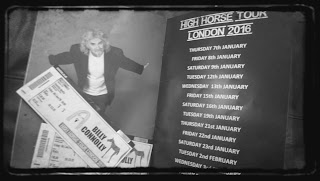 So, this is his second night of a 15-night run at the venue and his opening salvo is to point out that last night was hilarious and, if this night isn't, it's our fault as an audience. The typically aggressive style is always tempered by a twinkle in his eye and the hint of a smile. He then launches into anecdote after anecdote that, although I'm sure are well rehearsed, seem like effortless improvisation. There's where seeing him live differs, in that you feel like you're drawn into a pub conversation with someone you don't want to interrupt and you certainly don't want them to stop talking. The few heckles and whistles of a typically buoyant crowd are met with some equally buoyant comebacks from a man who's mind is clearly still sharp and quick even if his physicality isn't. One leads off into a very funny Spike Milligan story about placing an advert in his local newspaper after he'd lost his dog, which simply said: 'Here, Boy!' and the others get a put-down or a swearing riposte.

It's odd. For a man who I'm acutely aware swears like the docker he used to be, I hardly noticed the swearing and when I said he didn't swear much afterwards, it was politely pointed out that he did; simply by reminding me of the beggar in the shop doorway that he calls a 'c**t' for berating him for offering money.

I don't know if any of his routines have been done before and, if there are people in the audience who've attended his stand-up gigs religiously who recognise them, it doesn't show from the amount of people bursting with laughter. And I do mean 'bursting'. I've never seen so many involuntary doubled-up, belly laughing people in my life, or with their heads thrown back and actively repeating what he said out loud. The laughter was infectious and it's this roar of love and affection over the footlights that must be what always makes Billy Connolly laugh himself. For, as you'll know if you've followed him, he's not shy of laughing at his own jokes – whether nearing a pay-off to a story or adding a cheeky extra to the end of one. It's clear he enjoys and revels in being in front of a crowd who he works like the professional he is. Let's not forget, he's celebrating 50 years as a stand-up and – although he still comes across as someone who's just telling you a funny tale between a folk song (which is how he started out) – he clearly knows what works and what doesn't. 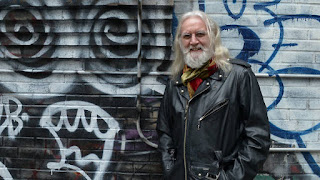 There's no interval and the show runs for two hours, which honestly seems like half an hour. Coming from a theatrical background (and from someone who performs and loves improvisation comedy), you usually adhere to the age-old wisdom that an audience can take about 45-minutes of sustained laughter before they burn out and they need a break – which is where the Interval comes in – and then you can come back for another 45-minutes with everyone refreshed. As with any rules and structures in life and in art, Billy Connolly tears them down and throws them away. He's got us laughing, in ebbs and flows, for the full two hours and it doesn't let up or get weaker as he comes to his final story. It is actually a genuine shock when he just says 'goodnight' and ambles off, with no return for an encore. It's not that he stops abruptly but the last story is as funny as the first story and you just expect him to keep going.

So, despite the physicality which I assume you'd expect from a Billy Connolly show, this is business as usual. His mind is full of stories that take you on a journey though his life and interconnect in the oddest of ways. He's aware of his fame but downplays it brilliantly and still comes across as someone who's become famous by chance. In essence, he's Billy Connolly and he's not going to change – regardless of the ill-health that's been forced upon him.

If you can, and certainly if you've never seen Billy Connolly live, you should do yourself a favour by grabbing a ticket before the run ends. I hope he continues to tour and gives everyone his unique view of the world and I'm sure the warmth and reception of audiences boosts him in his fight against Parkinson's. If you go, I promise you won't be disappointed. He's a genius and, as he says in a very funny anecdote about a 'Who Do You Think You Are?' type of family tree display at the Edinburgh Library, it's only him and Sean Connery who anyone knows amongst the list of 10 Famous Scottish People showcased (“I say that to piss off Ewan McGregor!”). He's not just a Scottish legend. He's just a legend, pure and simple.