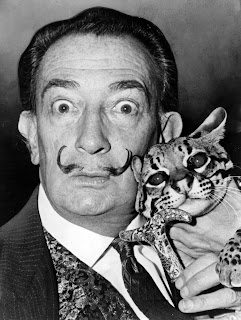 Susan Omand sets her artist's beret at a jaunty angle again to explain the enduring appeal of Salvador Dali...

When you hear the name Salvador Dali what do you think of? Long legged elephants? Melting watches? That eccentric, twirly “baddie in a silent movie” moustache? These are all things that have made him a household name, even in households that do not “do” art.

Dali, or to give him his Sunday name, Salvador Domingo Felipe Jacinto Dalí i Domènech, Marqués de Dalí de Pubol, is best known for his surrealist work. So what is surrealism? The official description is that it "resolves the previously contradictory conditions of dream and reality," in other words, surrealism is like the imagination that we all have when we dream, the bits that don’t quite make sense when you wake up (like why there is always a penguin in the fridge, or your house is actually on an oil rig and you can never get the light switches to work), although in the dream it’s perfectly acceptable. The difference between surrealism and the pure fantasy art of imaginary landscapes, unicorns and angels, is that surrealism takes everyday objects, like clocks, eggs or elephants (or penguins), and puts them in completely unexpected situations or does startling things with it. For a non-Dali example, think of the painting of the man with an apple for a face (Rene Magritte’s The Son of Man). You wouldn’t expect the apple to be there normally but you know what it is and it kinda makes sense why it’s there.

Dali didn’t just stick to paintings though, branching out into sculpture, furniture and even film work in his later years. One of his most notable sculptural pieces is his lobster telephone where, as the title suggests, the handset of an old fashioned dial telephone is replaced by a plastic lobster. Obvious really, isn’t it? And one that you may not know was him was the sofa that looked like a lipsticked mouth, Mae West Lips.

But back to the paintings. I have two Dali prints on my wall, and neither of them are the melty watches one. It, by the way, is The Persistence of Memory – interestingly the idea apparently came to Dali as he was thinking about Einstein’s relativity theory (and time being fluid) while watching a Camembert melt in the sun. At least that’s the story. And there are so many stories to Dali’s art as there is apparently a lot of symbolism in it – mostly sex and death, mind you. Whether this is intentional or not, only the artist knows. 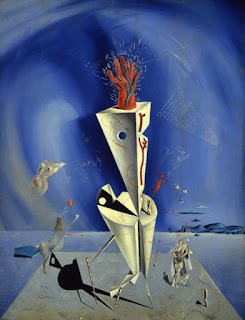 The ones on my wall are Apparatus and Hand (above), which makes no earthly sense at all, with disembodied torsos, donkeys without heads, random angular geometric shapes that appear to be of marble and yet the veins are blood-filled. And yet... it works as your brain tries to make sense of it. The shadows of the geometric shapes have human form, the blood flows into ghostly beings in the sky, the footprints in the sand are echoed in the flock of birds in the sky. 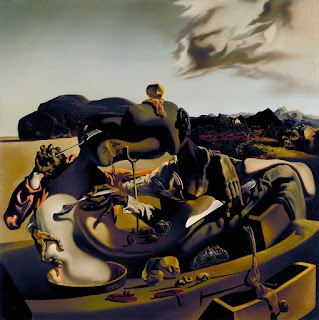 The second I have is a recent acquisition, bought for a fiver at a second hand shop (who says art has to be expensive?). It’s called Autumnal Cannibalism and is a lot more like the Persistence of Memory one since it shares the melty aspect in some of the objects and the barren desert setting. It features a dining table in an earthy, barren desert, with disembodied arms using fine silver cutlery to cut into what looks like its own self and lifting spoons of white flesh. What interests me most though is not the table, with things melting into its drawers, the symbolism of the self digestion or the contrast between the overfilled dining space with the barren desert. It’s the cloud in the top right hand side. It annoys me. It intrigues me. I mean, just look at it. It has no right to be there. Why was it included? It must have been deliberate. And why does it look like that, it’s not even a proper cloud! Gaah.

Anyway, my favourite Dali painting is none of these. My favourite of his hangs in Glasgow, in the Kelvingrove Gallery and is like nothing else Dali ever did. In fact it’s the complete opposite. Traditional rather than surreal, religious rather than carnal, mystical rather than material. I give you Christ of Saint John of the Cross. 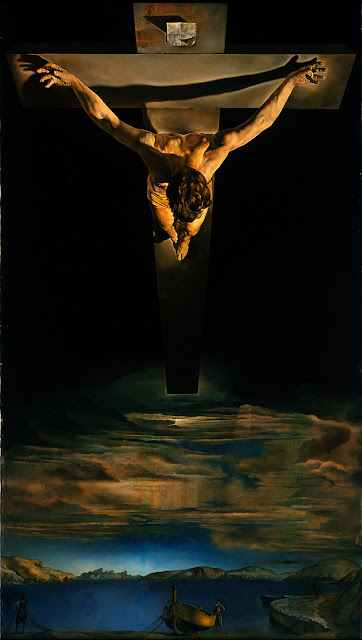