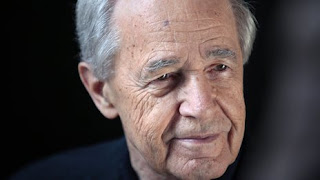 Tributes pour in for the world-renowned French conductor-composer Pierre Boulez, who has died aged 90...

Pierre Boulez was considered one of the most influential composers in contemporary classical music since the 1950s and, as a conductor, he was in demand around the world. As a composer, Boulez's work was noted for its difficulty, with one of his most celebrated works, Le Marteau Sans Maitre, being inspired by surrealist poetry. Similarly unconventional in his conducting, he always shunned the baton, choosing to conduct with his hands alone. Boulez died "peacefully" Tuesday at his home in Baden-Baden, Germany, said his assistant Marion Thiem.

Many orchestras paid tribute to his work:

A statement on the website of the Philharmonie de Paris, where Boulez was head of the venue read "For all those who knew him and who could appreciate his creative energy, artistic standards, availability and generosity, his presence will remain vivid and intense."

Alan Gilbert, his successor as music director at the New York Philharmonic (Boulez was there from 1971 to 1977), described him as a "towering and influential musical figure whose Philharmonic leadership implicitly laid down a challenge of innovation and invention that continues to inspire us to this day." The Philharmonic will also dedicate their concerts taking place January 7–9 and 12 to him.

Ulrich Knörzer, a member of the orchestra board at the Berliner Philharmoniker said “With the death of Pierre Boulez, we mourn the passing of an artist who combined unerring ingenuity with great personal kindness. His superior mental strength was also evident in his own compositions which impressed listeners by their intelligent design as well as by their sensual colours.

In a tribute to his longtime colleague, Chicago Symphony Orchestra Music Director Riccardo Muti said: “With the loss of Pierre Boulez, the world of music today is infinitely poorer. As both an admirer and friend of the Maestro, I am deeply grateful for his contributions, as composer, conductor and educator, to the Chicago Symphony Orchestra, with which he had a collaboration of nearly 50 years, and served so brilliantly as its principal guest conductor and conductor emeritus. His great musical artistry and exceptional intelligence will be missed.”

Individuals in the classical music world also remembered the great man. As recently as 2009, already in his mid-80s, Boulez joined with fellow conductor Daniel Barenboim to conduct the complete symphonies of Gustav Mahler at Carnegie Hall. Barenboim wrote on his Facebook page that "Personally, I have a lost a great colleague, a deeply admired creative mind and a close friend." and added "Pierre Boulez has achieved an ideal paradox: he felt with his head and thought with his heart."

Another composer/conductor Essa-Pekka Sallonen tweeted "He was a huge influence and a great support in my life. Thank you for everything you’ve done Maître."

The pianist Lang Lang also tweeted "Pierre Boulez was a great friend & mentor. I join the world in mourning his passing and will treasure my memories of him. RIP, Maestro."

Having left France in a temper at the political establishment's attitude to the arts, Boulez took up residence in Germany in the 1960s but he was enticed back by President Georges Pompidou, who asked him to set up the contemporary music centre Ircam, in the 1970s and today's French politicians also paid tribute to him yesterday.


French Prime Minister Manuel Valls paid tribute to Boulez on Twitter: "Courage, innovation, creativity, this is what Pierre Boulez meant to the world of French music, of which he made a beacon of light throughout the world."

And French President Francois Hollande said in a statement: "Pierre Boulez made French music shine throughout the world. As a composer and conductor, he always wanted to reflect on the ages."

The final word though, should probably go to the man himself who said at one point "I shall be the first composer in history not to have a biography."

That may well be the case, however, M. Boulez, you have left us a wonderful legacy.