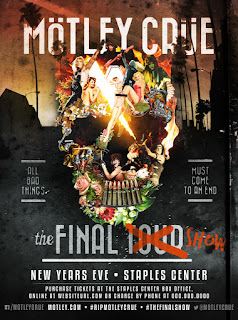 Motley Crue goes out with a bang (and a creak) at the final show of their final ever tour on New Year's Eve...

But last Thursday evening all of that ended as they played their final ever concert in their home-town of Los Angeles at the Staples Center.

The show included all the big hits and more with the addition of some stunning covers. The full set list is below:

Midway through the set, singer Vince Neil handed over the mic to bassist Nikki Sixx for this emotional speech:


The press conference announcing the tour, which started in 2014, saw them sign a “Cessation of Touring Agreement,” a legally binding document saying that the members agree to never tour as Motley Crue again so that really was the end of the line but for those who were unable to attend, never fear! To celebrate their mark in rock music’s history the band also announced a full length concert film of the final performance, which will also include exclusive interviews and behind-the-scenes footage of the last week of the tour, to be released later in the year.

After thirty-four years together, the Final Tour has seen the band perform a total of more than 164 shows. The promotional press release for the show said "Fans alike will be able to enjoy and/or relive the spectacular and cutting edge production elements of the Final Tour, such as Tommy Lee’s 'Cruecifly' drum roller coaster" however things didn't quite all go to plan for the final ever show, as Tommy Lee got stuck upside down when the roller coaster malfunctioned and had to be rescued.

Before the shows, Tommy explained about the rig in an interview, saying “The premise was, ‘We have to make this the most fucking insane thing that’s ever happened and no one will ever be able to pull this off. I’ve always, throughout the years, tried to come up with something new and different and entertaining. When people walk away, you want them to go ‘Dude, I can’t believe what I just saw. That was insane.'”

As you can see from the footage, filmed by a fan, Tommy's "Crueciflying" drum solo really was "fucking unbelievable" in more ways than one...


We'll keep you up to date with news of the concert tour film as it progresses.