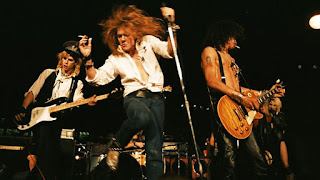 BBC4 lines up a documentary film about one of the most hotly debated bands (in  the AlbieMedia office at least) Guns N Roses...

In 1985, Sunset Strip in Los Angeles gave birth to what would become one of the most successful and notorious rock bands of all time: Guns N’ Roses. Axl Rose, Slash, Duff McKagan, Izzy Stradlin and Steven Adler formed a band that would change the history of rock 'n’ roll. They produced one of the greatest debut albums of all time and went on to play to countless millions.

Award-winning director Jon Brewer (B.B. King: The Life Of Riley and Nat King Cole: Afraid Of The Dark) tells the story of ‘The Most Dangerous Band In The World’ and how they came from playing bars on the Sunset Strip in Los Angeles to stadiums across the world. The explosive rise of one of the most notorious bands of our times – it's a story of sex, drugs and rock 'n' roll in excess. The film has been painstakingly compiled from a host of exclusive, never-before-heard interviews, and the early footage of Guns fan and friend Marc Canter.

Guns N’ Roses are one of the most successful rock bands of all time, with their debut album Appetite for Destruction selling over 30 million copies worldwide and spawning some of the most famous rock songs ever written, like Welcome To The Jungle, Sweet Child O’ Mine and Paradise City. Since that release in 1987, the original line-up of Guns N’ Roses have gone to sell over 80 million records worldwide, releasing G N’ R Lies 1988, Use Your Illusion I and Use Your Illusion II in 1991, and The Spaghetti Incident? in 1993.

Director Jon Brewer is quickly becoming one of the most sought-after filmmakers of the past decade; he has a way of telling the stories of icons which has captured audiences worldwide. His previous work has included documentaries on Jimi Hendrix, B.B. King and Nat King Cole.

The Most Dangerous Band In the World: The Story of Guns N’ Roses is set for a premiere on BBC Four at 10pm on Friday 5 February 2016.