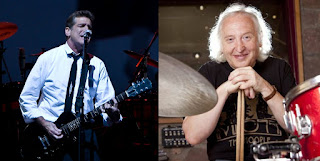 It's another sombre day at the AlbieMedia office with news of the deaths of singer Glenn Frey and drummer Dale Griffin...

Dale Griffin may not be a name known to many but the band he founded certainly will be. Born in Ross on Wye in 1948, Griffin played in several bands with school friends and others before a final line-up change in 1969 saw the band that he became most famous with formed. That band was Mott the Hoople. Their most famous track was probably All the Young Dudes, written and produced for them by David Bowie, whose intervention was also instrumental in keeping the band together after a threatened split in 1972. Other hits followed such as All the Way From Memphis and Golden Age of Rock and Roll. After his career as a drummer, Griffin went on to be an acclaimed record producer, having a hand in albums for bands such as Hanoi Rocks, The Cult and New Model Army as well as producing several of the John Peel sessions for Radio 1 in the 80's and 90's. Griffin was diagnosed with Alzheimers disease just as Mott the Hoople were reforming for their 40th anniversary tour in 2009, the Pretenders drummer Martin Chambers stepping in for him for the majority of the concerts. Dale Griffin died peacefully, aged 67, on Sunday night.

News reached us late last night too of the death of Glenn Frey, also 67, founder member of the band The Eagles, formed after Linda Ronstadt needed a backing band, as well as being a highly successful solo artist. Frey played guitar, keyboards and sang lead vocals with the band, also writing, or co-writing with Don Henley, most of their hits such as Hotel California, Tequila Sunrise, Take it Easy and Lyin' Eyes. After the first break up of the Eagles in 1980, Frey went on to have several solo hits, writing and recording songs for several soundtracks, including The Heat is On for Beverley Hills Cop and Smugglers Blues Miami Vice that became huge successes in their own right. He also achieved chart success with songs from the Ghostbusters II soundtrack and Thelma and Louise before re-uniting with old bandmates, including Don Henley, as The Eagles reformed in 1994, touring and recording with them until very recently. His death was announced on The Eagles website on Monday night.