News - The End of Longing 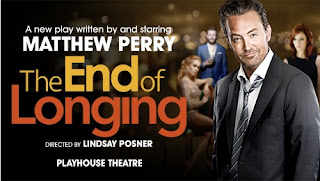 The man whose character inspired the name of our website is about to hit the London West End stage in his own play...

Matthew Perry (who played Matt Albie in the short lived but genius TV series Studio 60 on the Sunset Strip) is to star in his own play, The End of Longing. Directed by Lindsay Posner, the play will open at the Playhouse Theatre in February 2016.

A hilarious and dark comedy, The End of Longing follows the story of four people searching for meaning as they enter their forties. Jack, Stephanie, Joseph and Stevie share a crazy night together in an LA bar, but as they celebrate, their lives become permanently entwined. From this point, they are sent on a wild rollercoaster ride that forces them to face the darker sides of their relationships.

Although best-known for his film and TV work, The End of Longing, as well as being Perry's playwriting debut, marks his first return to the West End since 2003, when he worked on Sexual Perversity in Chicago at the Comedy Theatre, also with Posner, and he turned to this director again for his own project. Posner has many West End directing credits to his name, including Uncle Vanya and The Turn of the Screw.

The End of Longing will star Matthew Perry as Jack, Lloyd Owen as Joseph, Christina Cole as Stevie and Jennifer Mudge as Stephanie. Anna Fleischle will provide the set design whilst lighting will be designed by Lucy Carter.

The play opens at the Playhouse in London on February 2nd and runs until May 14th 2016.