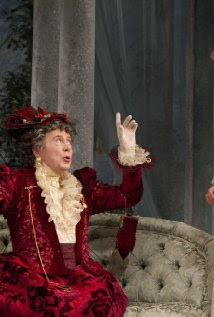 Susan Omand takes a quick look back at the work of classical theatre actor Brian Bedford, who died on Wednesday at the age of 80 from cancer...

Brian Bedford is an acting name not known to very many in the UK, even though he was born in Yorkshire and studied alongside the calibre of Peter O'Toole and Albert Finney. Tony Award winner and winner and nominee of many other theatrical awards, Bedford was a stalwart of the Shakespearean stage and was involved with Canada's prestigious Stratford Shakespeare Festival, which is based in Ontario, for almost three decades. He also appeared as Lady Bracknell in the Broadway production of the classic Oscar Wilde play The Importance of Being Earnest amongst many other stage roles and he is quoted as saying "While I wanted to live in America, I also wanted to have a British actor's career."

So why am I telling you about his passing? It's not because of the huge amount of stage work, nor his work in films such as Oliver Stone's Nixon, where he played Clyde Tolson. No, it's because, as well as losing my favourite film Sheriff of Nottingham in Alan Rickman yesterday (see our sister site /Garbage-file tributes to Alan Rickman here), with the death of Brian Bedford, I also lost my favourite film Robin Hood.