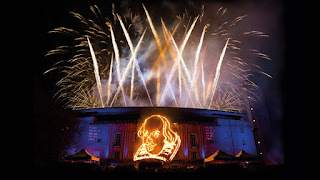 Partnering with some of the country’s leading arts organisations, this unique festival will bring to life the genius of William Shakespeare for millions of households in the UK and around the world, across all platforms - national, regional and global. The festival aims to make Shakespeare’s work irresistible to everyone.

In the historic Radio Theatre, Director-General Tony Hall today announced the BBC’s ambitious plans with an exclusive preview of its content which featured speeches from Gregory Doran, the RSC’s Artistic Director, guest appearances from David Tennant and Sam Mendes, a performance from Hip Hop Shakespeare, an extract from Romeo And Juliet with emerging stars from the RSC Rob Gilbert and Jennifer Kirby, a special Shakespearian sketch from Horrible Histories, and finally, a special performance from Midsummer Night’s Dream: A Play For The Nation with children from Eastbury School in Barking, alongside actress Ayesha Dharker as Titania.

BBC Director-General Tony Hall said “Shakespeare’s in our DNA. For 90 years, we’ve been broadcasting his works to successive generations, but we’ve never done anything as daring, as adventurous as we’re doing now. This year, we’re bringing to life my vision of what the BBC’s about – using all our services to make Shakespeare irresistible to everybody. And joining with some of our country’s greatest institutions to bring their creativity to millions here and across the globe."

Gregory Doran, Artistic Director of the RSC, added “Shakespeare is for everyone, so we want as many people as possible to have a chance to experience his work this year. We are thrilled to collaborate with the BBC in a fantastic initiative to bring Shakespeare's legacy to audiences all over the UK, including work direct from the RSC's theatres in his home town.

"We will mark this remarkable 400-year anniversary with Shakespeare Live! From The RSC, hosted by RSC Associate Artist David Tennant and a feast of artists from music, dance, theatre, film and comedy; our nationwide tour of A Midsummer Night's Dream; and a huge year-round programme in Stratford, London, in cinemas, classrooms and online.”

Shakespeare Live! From The RSC, will be broadcast during the weekend of Shakespeare’s birthday. Hosted by David Tennant, directed by Gregory Doran and produced for television by John Wyver and Catherine Stirk, Shakespeare Live! From the RSC, will celebrate Shakespeare’s enduring influence on all performance art forms. A stellar cast, including Dame Judi Dench, Ian McKellen, Joseph Fiennes, English National Opera (ENO), Birmingham Royal Ballet, Ian Bostridge, and Akala (Hip Hop Shakespeare) will perform in a unique star-studded tribute to the genius and influence of the world’s greatest playwright and storyteller.

As well as that a vast range of programmes and plays are planned across the TV and radio networks. Highlights include landmark dramas with BBC Two’s The Hollow Crown: The Wars of the Roses, executive produced by Sam Mendes and starring Benedict Cumberbatch, Dame Judi Dench, Keeley Hawes, Sophie Okonedo, Hugh Bonneville, Sir Michael Gambon and Tom Sturridge and A Midsummer Night's Dream by Russell T Davies featuring Matt Lucas, Maxine Peake, John Hannah, Elaine Page, Richard Wilson and Bernard Cribbins which will air on BBC One.

There are also programmes about Shakespeare, from the serious, where BBC Four will be looking at Shakespeare from a foreign perspective with Arena: All The World’s A Screen - Shakespeare On Film which explores Shakespeare’s relationship with film including footage from Laurence Olivier, Orson Welles and Baz Luhrmann, to the not so serious, like a new comedy from Ben Elton and a Moments of Wonder special by the sublime Philomena Cunk from Charlie Brooker's Screenwipe.

See some more of the programmes planned in the video below: