Music - Loving the Alien, A Tribute to David Bowie 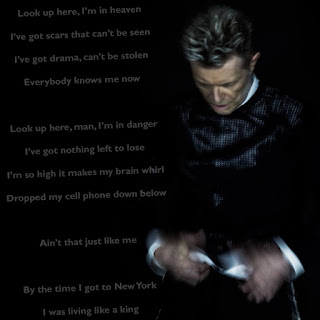 After this morning's news, Susan Omand writes about what the work of David Bowie meant to her...

There are days when the world stops turning, just for a moment. Today, for me, is one of those days.

As news broke on the radio this morning of the death of David Bowie I didn’t quite believe what I was hearing. Surely they’d got it wrong? He’d just had a birthday last Friday. We’d made a big deal about his new album Blackstar coming out on the same day. He can’t be gone so soon after that?

Alas it was true. Reports confirmed that he had been battling cancer for the last 18 months and the tweet from his son Duncan Jones was what finally brought the tears for me.


So. Having spent the last week listening through my Bowie collection to do my analysis of his record covers in celebration of his birthday and albumday (here) I now find myself listening to those same albums with a more reflective tone.

I’m one of the few I know that came to Bowie’s music in his mid 80’s commercial period. Having been petrified by the video for Ashes to Ashes and that Pierrot clown look a few years earlier, I was amazed that this was the same person with the blond hair and baggy suits. I loved the pop of Let’s Dance, China Girl and Loving the Alien. I loved the Live Aid record he did with Mick Jagger. Then I started looking back at what this person with the weird eyes had done before and discovered the wondrous rock and roll of Ziggy Stardust. Then the glam of Aladdin Sane and the stripped back Berlin sound of the Thin White Duke. This chameleon of a musicman had inhabited so many other personas. All unique, all cutting edge, all so totally out of step with the world at the start and yet with everyone emulating him within a few months. Truly a trend setter.

It was this ability to change, to be two steps ahead and one step to the side of everyone else, that I admired about Bowie more than anything else. Never scared to be different, always pushing the musical boundaries, MAKING people follow his lead purely because that was the way to go.

And the 80’s persona was also just another mask as the music morphed again into the hard edged Tin Machine where Bowie wasn’t a front man, he was a part of the democratic machine. His return to solo work brought forth another face and another as the music evolved and changed from the rock of Jump They Say on Black Tie, White Noise to the bombastic glam of Hallo Spaceboy on Outside to the rich diversity of all the tracks on Hours. Then after Reality... nothing. For ten years. “Was that it?” I wondered. Is it finished? Are there no more masks to reveal?

The Next Day burst on to the scene in 2013 and tore holes in everything that had gone before, literally and figuratively. This was a clean slate. Another new start. Another re-invention. I started looking forward to hearing a lot more from the Starman again and was really hyped up for the release of the new album last week.

I can’t quite bring myself to listen to Blackstar now, knowing that it’s the last new thing I’ll hear from David Bowie. It’s like not wanting to eat the last of the Christmas chocolate because then it’s finished. There’s also a poignancy about my observation in Friday’s article that there is no Bowie on the Blackstar album cover. There are no more faces to reveal, no more sides to the character.

I’m just not sure we ever got to see the real one.