Interview - My Journey Through Art Through Music 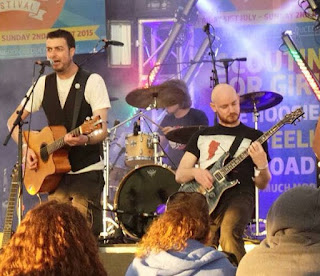 Inspired by Steve's week of his Journey Through Music interviews, Susan Omand looks back at her own journey of a different sort and talks to a major musical influence, the band Under A Banner...

In 2008, and on a milestone birthday, I made the leap and gave up my day job to try and make a career out of art. I had a five year plan in my head of slowly building the business through art & craft fairs and the ultimate ambition was to have an exhibition of my own at the end of that time. All was going well, the fairs were busy, but I wasn't doing the kind of art I wanted to do, although I didn't at the time, know what that was. Four years into that five year plan everything changed.

I'd been on Twitter for about 6 months when, in July 2012 I tweeted a photo of my latest painting of Bowfiddle rock off the Moray Coast, done in acrylics and my first attempt at using a palette knife. 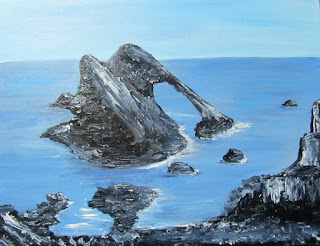 Out of the blue I got a tweet from @UnderABanner. This was singer Adam Broadhurst saying that he was in the band Under A Banner and they were looking to release their first full album, they liked my work and would I like to design their album cover? My first thought was "AAAAAAAAHHHHH" and my second was "yeah, ok."

Thus began my journey into the kind of work that I now do. Through working with Under A Banner on the album cover for The Ragged Rhythm of Rain I've ended up doing all their album and T-shirt artwork since. Through them, I met author Kneel Downe and I now do all his book covers, website work and illustrations and have gone on to do book covers, collaborations and illustrations for several other great authors. Because of meeting Kneel, I met Steve Taylor-Bryant, joined him in DreamCage Media Group and that's why I'm writing this now for our newest website in the portfolio.

So yeah, everything I am now I can blame on Under A Banner. Oh, and the exhibition? I did that in February 2013. Eight people saw it. Oh well.

Here's my interview with singer Adam Broadhurst and guitarist Jake Brooks from the band, both also fantastic songwriters in their own right:

Jake - I think it's something that has always been there, but one of the first people I remember being inspired by was the teacher who played piano in my primary school. The morning assemblies always had her playing/accompanying us singing.

Adam - My love of music began when I was left alone with my parents' 1950s record player, complete with 78 rpm turntable speed, and mounds of singles and LPs. I instinctively cast aside most of those with overly bouncy and major key melodies and glib lyricism. I focused instead on sweeping and grandiose minor key songs which told stories or spoke of other worlds.

Do you remember your first album and single that you bought?

Jake - Album I think was the greatest hits of 1998. Does that count?!? Single, I'm not so sure about. I recall Papa Roach for one reason - Last Resort.

Tell us about the first gig you went to and which has been the best?

Jake - First gig, a local one in Malvern. I don't remember the name of the band, but I remember buzzing afterwards, knowing that was what I wanted to do. Best gig... That's hard to answer as I think it changes all the time! Top 3 though: Rammstein, RHCP and Joe Bonamassa.

Adam - My first ever gig was The Cure in Birmingham in 1992. My favourite gig ever is a quirky one: In 1993 or 1994 I was invited to a secret EMF gig at a tiny cowshed of a social club in the heart of the Forest of Dean. They were supported by The Wurzels and two young ladies covered in cake! (Not their band name)

Where does your songwriting inspiration come from?

Jake - Anywhere and everywhere! It's never a set place, which is why I find my phone recording so useful.

Adam - My favourite song I've written is either Some Stories, The Wild Places or a new one from our forthcoming 3rd album, about which I can't reveal too much at present.


And which song do you wish you had written?

Adam - I really wish I'd written many songs. The very first song I wished I'd written was Don Maclean's Vincent; it embodies structural simplicity and narrative power.

What are your views on the music scene today?

Jake - It's very healthy! Not so much in the commercial side of it but look around and there are some great bands out there.

Adam - There are times when the music scene seems like a hobbling wounded animal, glutted on prior hunting successes and teetering on extinction. Then, when one is able to forget that privilege can buy success and big labels only seem to invest in the facile and vapid, the light breaks through and you remember that people are still paying to see live music and are prepared to emotionally invest in something that continues to mean something to them.

And your hopes and fears for music in the future?

Adam - Following on from the above industry related comments, I hope that people see beyond the acts who are continually paraded in front of them on a media conveyor belt made of big money and embrace more and more new music.

Jake - I hope that more people realise the importance and energy of live music, and are encouraged to get out more, as opposed to listening to fake instruments making sound in the bedroom. Although I think with the decline of clubs, this is being realised, so I'm very hopeful for the future of music.

What's next for you musically?

Adam - Under A Banner are about to record a 3rd album and follow this up with a series of dates. We will continue to try to reach as many people as possible.

Jake - Back into the studio to work on our new album! More gigs throughout the year to look out for too.

Thanks very much to Adam and Jake for taking time out of the busy schedule to answer our questions - we're all looking forward to hearing the new album when it comes out later this year.

Images - Under A Banner and Omand Original
Email ThisBlogThis!Share to TwitterShare to Facebook