Interview - A Journey Through Music: Part 5 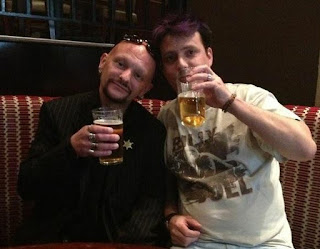 Steve Taylor-Bryant has been thinking a lot recently about his life's journey through music and is speaking to those family and friends that impacted on him in some way. Today it is Kneel Downe...

Some friends aren't from childhood. With the amount of moving we did as children and then my own nomadic work existence, holding down true everlasting friendships was difficult. Then in 2011 I changed my life. I gave up the career that kept me moving and pushed unbearable hours upon me and settled into a relatively simple, more normal way of life. When I travelled now was up to me and was for fun rather than work. I'd gotten myself involved online with an author and developed a real and meaningful friendship, or as real as talking with an avatar can be and, after a few months, went to visit Manchester and meet in person this new acquaintance. Sitting in the Hard Rock Cafe in a beautiful and welcoming city, before the first pint of beer had been consumed, a debate raged about one of the bands whose video was playing in the background. This however was a decent proper debate, not an argument, this was two grown men listening to each other's point of view and asking the whys and wheres of each other. This was two grown men comfortable in each other's company and telling stories of favourite bands, debating the rights and wrongs of each other's eclectic tastes and introducing each other to bands and artists that, for some reason, the other had missed. This was friendship that felt like it had been going on years not mere months. My relationship with this author remains strong and, whatever we've had to discuss or have been through in our lives since, always returns to music and musicians. Whether it's agreement on the value of The Levellers, disagreement on the musical talents of The Stereophonics, remembering old favourites like Faster Pussycat, or being introduced to bands like The King Blues, music is the heartbeat of our relationship.

It was with much interest I read your internal memo regarding Music and its place in my life. However, as you are aware of my acute reactions to anything interview based, I have duly eaten all the questions and, in a fit of childish rebellion, I have decided to address most of the points raised in this manner.

Ps. I hope the swelling has gone down. I can get more of the cream if needed.


A YOUNG BOY REMOVES THE VINYL FROM THE SLEEVE...

I was seven going on eight and I had two things.

One was a tape recorder. You remember the ones? Like a metallic brick. Big black keys and the one red key. A single speaker. Sound quality minus one.

I also had a record player. The box ones with a useful handle for easy transportation in case of sudden, unexpected dilemma or nuclear attack. It had a red body and a sickly grey lid. Again, one mono speaker and a metal arm that would hold records in place before slamming them down upon that slow rotating rubber deck. Sound quality? Possibly a four.

I had two things and along with my rapidly growing pile of books they were the most important things in my life.

I owned records that had been bought as gifts. Abba. Some Glam Rock compilations. The odd single. Also, the house had music of its own. Some musicals. Tommy Steele. The odd Beatles album (not the STRANGE stuff, obviously) And so music was already a staple of my life. I enjoyed it. I listened without prejudice. Without understanding.

Here's where the tape player comes in to play. Across the way was an older boy who was training to become a vet. For some long forgotten reason we had become friends (I suspect it had something to do with Doctor Who...most things at this time did)

Now...this teenager loved his music. He KNEW his music and soon he began passing this disease over to me. He made me tapes. Strange tapes. Noisy tapes. Odd as fuck fucking tapes. Low...later Heroes...Yes...Jethro Tull...some awful, scary new band called the Sex Pistols and perhaps most importantly...The Alice Cooper Show.

Now...this is a very substandard live recording, pushed out due to contractual reasons...but for some reason, at that particular time I felt something break in my head...

All songs are about boy meets girl. Girl leaves boy. Boy gets lucky.


All songs are about fucking.

This is obviously untrue and yet to these young ears that seemed to be the general gist (in fact to this very futuristic day most songs still boil down to 'lets just do it, huh?')

But here, with my stack of handwritten tapes I was discovering this was not strictly true. A lot of these songs seemed to be angry about things. Some of them were just streams of utter nonsense. But, more interestingly, some of them seemed to be a mythical realm where songs and stories met and fused. The two most important things in my life were breeding before my very eyes...(we're back to fucking again aren't we?)

Years were passing, my pile of tapes was growing and although not quite old enough to truly 'Get It' I was learning. I was evolving.

Truth be told I was also hiding. Being 'Odd' in a farming community is never easy. I has become a target for bullies. An easy, somewhat frail target. No matter. I had my armour. My companions. Books and music sustained me. Taught me.

By now I had The Who, Deep Purple, Black Sabbath, earlier Bowie, as much Alice as my tutor could locate. I had New Wave (I liked New Wave...it was like punk but without the punching) I had tried reggae but as of yet it was still baffling. And slowly, despite my fear, I was 'Getting' proper punk.

A line in the sand was coming. One summer holiday it arrived.

The arrival of proper pocket money brought the impetus for real change. For transformation. The chance not to have music bought for me but to actually buy it myself. To perhaps even buy my own clothes?

Madness I hear you cry.

I embraced the madness. No more Bullies. No more hiding. No more soft spoken little me.

I bought tight black jeans. Big boots. A secondhand leather jacket and I bought three records...I bought them myself.

Two secondhand singles...God Save The Queen and Silly Thing.

And I bought an album...No Sleep Till Hammersmith.

I went back to school a different person. The Future had arrived and God, didn't I love it. 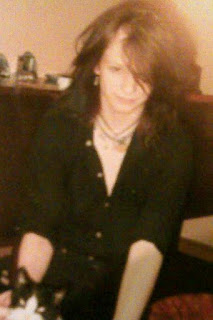 And once again there were Two Things...

These two things were three minutes apart on the same street in Blackpool.

A secondhand bookshop and a secondhand record shop. They were my temples. My social life. My family. I was most amused with the similararities of both. In one the hairy middle aged man would regard my recent purchases and knowingly slip me a Moorcock novel. "Here you go kid...you like that stuff? Wait till you've read this"

In the other a similar looking hairy man would nod wisely and reach into a battered box. "I think you're ready for this young 'un."

One day he handed me a Hawkwind album. I think my brain exploded. It was like insanity on a disc. It made no sense and seemed to revel in the fact. More importantly...It was Science Fiction. Real, full on Science Fiction. Not in a book but here, pounding in my ears. (Two worlds slipped ever so closer together)

So much music. So many bands. And even better...I lived halfway between Preston and Lancaster. The Guildhall and the University. Bands played there.

Maiden, UFO, Toyah, The Alarm, PIL, Gillan. Motorhead...the list is endless and noisy and quite, quite wonderful. I had become addicted. There was no way back.

Despite all prior warnings I grew up and left home. Music was changing and mutating. Quite obviously I became a Goth (C'mon, how else could I legitimately pretend to be Ziggy Stardust?)

More time...more changing. Goth morphed into the garb of Trash Rock as Hanoi Rocks and The Lords of the New Church entered my world. I moved to Manchester. I formed a band. My own damn band!

There is nothing quite like standing on a stage. Trust me...not book releases, not reviews or interviews. The release is phenomenal. The energy. The buzz.

One night our soundman handed us some amphetamine a touch above the usual strength. It was pink and stank of TCP. Our 40 minute set was over in 20 minutes...undeterred we just played it all again. Nobody noticed.

This was glorious. Wonderful. Nothing could be better than this. We would endure for ever!!

Six months later we split up.

But in between the band splitting and my relocation back to the countryside to live a year as a shambolic Hippy Punk something happened.

I wrote a book. A proper full length book. It was shit but I had written it.

The future was about to take some strange turns... 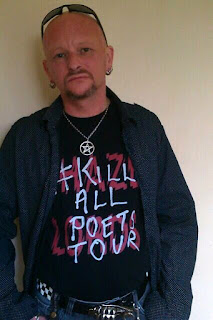 In part two we will look at what Music means to me. How I use it in writing. Why it is the most vital of artforms. And we may address the incident of Glastonbury and the Elf in the cornfield.