Interview - A Journey Through Music: Part 3 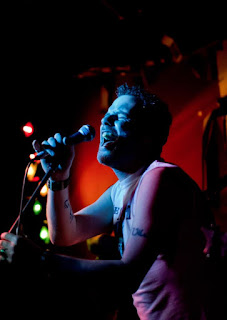 Steve Taylor-Bryant has been reflecting on his life. This week he is going to introduce you to the family and friends that have impacted on his musical being. Today it is Mike Headington...


In the very early 1990's, when I was in my prime of youth and a teenage drummer living away from his parents for the first time, I loved the area I lived in, which was pretty much one road of live music venues. I was playing for a covers band I'd started in school doing stuff like Ugly Kid Joe and The Clash with two school mates on vocals and keyboards, a mechanic, whose apprentice I was, on bass, and a friend’s dad on guitar. We were good. We were tight. We were gigging. After an impromptu jam at a bar called The London Inn, myself and the bass player, Adrian, were approached by a couple of men called Steve and Mike.

I didn't know Mike but I'd seen Steve play guitar and the guy was seriously good. It turned out Mike was a singer and the two had a band they had started in the 1980's called March of Time but hadn't been on the scene for a bit. They were looking to come back but needed a new back line and saw something in me and Adrian that they liked and wanted to work with. It was nearly all original material with some excellent covers added in for good measure and the band had a very loyal fanbase. Rehearsals went well, we took the 80's stuff and added a rockier edge, Mike wrote like a demon and we ended up with a hell of a set. Everyone was given input, everyone was allowed to experiment and even I, at not quite old enough to drink the beers I was consuming, was regarded equal. I was allowed my own beats, what I thought worked, and we threw ideas around until the four of us democratically called a song finished. This was my first experience of working with a proper original band and I was elevated to a position higher than the session tag I'd had before. We stayed together in that line up for a few years, played everywhere from a small bar to open air festival and whilst, with the exception of a one off appearance a few years ago, we don't play together any more we are still close friends and Mike in particular is still a weekly contact of mine. He is my favourite unsigned lyricist. He is a raspy voiced ageing punk. He is my friend. Ladies and gentlemen, Mike Headington... 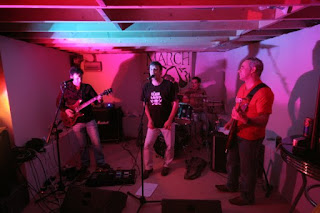 I was about 13 years old so it’s 1979, my sisters were listening to the likes of ELO and Rod Stewart which was fine but then I heard Sham 69 do Hurry Up Harry and I loved that whole energy and I fell in love with that punk era.

What was your first single or album purchase?

First album was The Boomtown Rats I think, A Tonic for the Troops and the first single was Hurry Up Harry by Sham 69.

What was your first gig and best gig as both a fan and a performer?

My first gig by a recognised band was in February 1982 and I saw Stiff Little Fingers in Bristol. The best one is a very tough question as I have various memories of gigs depending on moods and the like, Foo Fighters really rocked but I think I have to pick Joe Strummer. He is a big hero of mine as my tattoos will show you and he passed away on that tour so I am very lucky to have seen him. My first gig as an artist was at Weston super Mare Quarry in 1984 at a benefit for the miners during the strikes. Best I’ve done is really hard! There is so many memorable ones but I’ll go with singing for The Fanzines and getting to support U.K. Subs.

Where does your own songwriting inspiration come from?

My personal life makes up some of my songs but as you know yourself Steve the atrocity of war is where most of my lyrics come from. I write in the real I am not a fantasist.

What's your favourite of your own songs you have written?

I love Going Ashore in 1965 I am incredibly proud of that song. Bridge Too Far is another I wrote the lyrics for but the riff is what makes that song stand out and that was all Steve Kearns.

Which song do you wish you had written?

I loved the Jazzy/Reggae feel of Rudy Can't Fail by The Clash and wish that had been mine. I loved that whole period of my life and the clothes we wore. Luckily it was before digital cameras so my social media pages aren't full of the pictures!

What are your views on the music scene today?

I don’t like it at all. With all the recent deaths it has been brought home to me that we have lost the jewels out of the Rock ‘n Roll crown. Artists today just don't seem to be trying, the lack of effort is appalling. There is no one coming through to replace these iconic figures we are losing, there is no genius in music today, there is no depth in quality. Everything today is instantly replaceable.

What are your hopes and fears for the future of music?

I really hope that musicians get back to basics. Write a lyric that means something to you, play a riff that works, go and play live and tour, learn the ropes and earn the respect your predecessors have. I do fear though that the control that ‘moguls’ like Simon Cowell have will just grow and minds won’t change. We need more bravery in music. Bowie was brave, people would be arrested for being gay and there was this musical genius going on stage in a dress! There was uniqueness, I fear we are running out of time to find some originality in both writing and performing.

What is next for you musically?

Well believe it or not I hadn’t written any original material since those days with you in March Of Time in the 1990’s but I have sat myself down and decided to do an album of fresh stuff this year. 6 songs are written already and I hope to record this year. It will be slightly more acoustic in feel I think than my previous stuff but who knows ha! I am going to use some younger musicians in the recording band as I love the ideas that the talented youth in this town have and how that can affect my own performance or writing. I’ll let you know when it’s done.