Interview - A Journey Through Music: Part 2 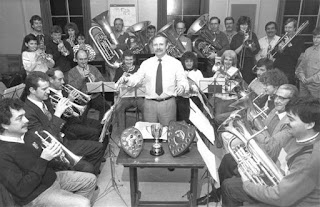 Steve Taylor-Bryant has been reflecting on his life. This week he is going to introduce you to the family and friends that have impacted on his musical being. Today it is his dad, John Bryant...


Everyone is really lucky if music makes up part of their very being, whether it be making drums out of saucepans as a young child (sorry mum!), seeing a guitar for the first time in school, that first crush on a pop star (sorry Simon Le Bon!) or learning to play an instrument or sing as you grow up. I was luckier than most as I was raised in a family where both parents played various instruments and any participation either my sister or I wanted was actively encouraged. I tried cornet but found my lip wasn't the best, I was taught acoustic guitar in school (I can still play Booker T and the MG's to this day) and bass by a friend a few years ago, and my love of noise was actively helped by my loving parents buying my first drum kit. Without that encouragement I wouldn't have played for the school orchestra, or a brass band in both concerts and competition, or rocked out playing in pubs, clubs and festivals. I have a lot to be thankful for. As well as playing I learnt to love all forms of music and still listen to everything from Handel to Metallica via jazz. I was taken to concerts and took in classical, pop, brass and rock alongside parents who seemed to enjoy being there with me. I also got to live abroad due to music as my father, a musician in the Royal Air Force, was posted to what was then West Germany (an important distinction as it shaped my historical and cultural upbringing as well as my musical one). This experience helped shape the man I have become (sorry again mum!) and so in our series looking at how our musical friends became who they are I thought to myself 'what better place to start than with my dad?'. So ladies and gentlemen please be upstanding for John Frederick Bryant...

How did your love of music start as a child?

When I was very young there was no TV! Even when we first had a TV there were only programmes on during very limited hours. Therefore the radio was always on. It tended to be on the BBC Light Program (Radio 2 equivalent). The content of music was light orchestral to dance band. (That is apart from the comedy shows such as Round the Horn, The Goons, Hancock’s Half Hour, The Navy Lark etc – but that’s another story!)

So I was surrounded by music all day!

Also our next door neighbour was the bandmaster of the local Town Band. So when I was 10 or 11 I joined the band and started to learn the cornet.

When did you take up music professionally?

When I left school at the age of 17 I joined the RAF as a musician. After passing the audition, I went to the RAF School of Music for 12 months. During this time we had to become equivalent to Grade 8 on our instruments (grades were not taught in schools at the time but only by specialist music teachers) and also learn our trade i.e. Marching and Playing, Learning to play as part of a team and learning the repertoire. After the School of Music we were posted to an established band.

I was in the RAF for 23 years and during that time I progressed to becoming a “Brass Leader”. Promotion through this time was done through a combination of formal and informal courses, lessons and exams in practical musicianship.

The last course I did was an intensive 6 weeks under the instruction of a civilian professor of Music that included conducting, history of music, theory of music, instructional techniques, music physiology leading to an internal RAF qualification equivalent to a part degree.

After 23 I left the RAF and had to get a “proper job” so music became a very important hobby to me.

How did this hobby manifest itself?

As I said at the beginning I started in a brass band. This interest continued whilst I was still in the RAF. I met your mum in a brass band! (Sorry again mum)

After leaving the RAF the local Brass Band became a big part of my life, not only the musical side but also the social side. Many of my friends are in the band. Not only do they have the same interests but they are all very close friends and “friends for life”

You do more than play though. Talk to us about arranging and transcribing?

During my time in the RAF Music Services I started to use the skills I had been given during the promotion courses, and started to transcribe and arrange for the wind band. I wanted good music from whatever source to be available to the band, many of the arrangements were used in concerts and marching displays. During this time I also started to adapt pieces for the local Brass Band.
One of the people who had been in the RAF with me but had left to join the famous Grimethorpe Colliery Band, got in touch to ask if I would adapt a concerto type solo for him to play with Grimethorpe. This I did and he used the piece on a CD and also on Radio 3.

When I left the RAF all of these skills went into arranging music for Brass Band.

I have a very broad spectrum of musical taste. I think there are some very good compositions done in the pop and rock idioms as there are in the orchestral one. However, the Late Romantic and early 20 Century Periods of Music are my favourite. Composers such as Elgar, Richard Strauss, Stravinsky, Shostakovich, there is lots.

How do you go about transcribing these composers for Brass?

Much of the music they wrote uses huge orchestral forces. There are 100 plus in the orchestra plus a huge bank of percussion. To adapt these pieces takes some thinking about.

It’s much like a screenwriter taking a book and transferring it to film. Pictures have to be used instead of thoughts and this is the same with music. You have to understand the language and writing and adapt it accordingly.

Things to think about are:

You have to maintain the same intent of the original.

You have to keep the same period and ambience.

You have to change the sound colours without changing the feel of the music.

You have to abide by the thoughts of the original composer but with a different pallet of colours and instrumentation.

With pop songs it is slightly different in that songs tend to concentrate on words so melodies tend to be repetitive. Therefore a change in instrumentation and colouring will be needed more to keep the interest.

Do audience tastes change over the years?

Of course they do. Just like fashion, tunes and styles come and go. Audiences tend to like shorter pieces now than they did when I was growing up.

However, good music is good music and if it’s presented well audiences should respond favourably. At least that’s the hope!

But how do you keep something traditional like a brass band fresh?

It’s very difficult. Brass bands have always been a niche market and they do tend to keep themselves in the early 20 century (at least in looks). Apart from the very early years of the brass bands when contests were treated very much as a sport and it was not unknown for riots to develop between the various supporters. (as with football in the 1970’ and 1980’s.) Brass Bands tend to follow the trends in music but sometimes not very well.

When you ask somebody if they like brass bands they tend to say no they are old fashioned.

However, when you hear a “GOOD” band people stop to listen and enjoy the music.

Bands sometimes don’t know which audience they are playing for; Radio 3, Classic FM, Radio2? This can cause a problem when programming music. Most bands will be playing for an audience that needs variety. So they must play some of what the audience know already, some nice light pieces, and the occasional piece that may be unknown and more “educational”. But as I have already said “Good music is good” music and as long as there is variety in a program most people will enjoy it.