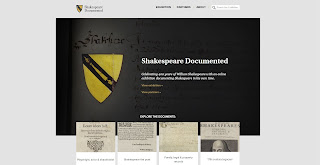 Want to find out more about Shakespeare? A new online exhibition and reference resource has been unveiled...


Shakespeare Documented, the largest and most authoritative resource for learning about primary sources that document the life and career of William Shakespeare, is now online at www.shakespearedocumented.org.

This free and publicly accessible online exhibition includes images, descriptions, and transcriptions of all known references and allusions to Shakespeare and his works during his lifetime and shortly thereafter, as well as additional references to his family.

"Never before have all of these resources been so easily accessible and searchable in a single place, for the use of the general public, teachers, and scholars alike," says Shakespeare Documented curator Heather Wolfe.

Nearly 500 references, found in roughly 400 print and manuscript documents, provide a rich portrait of Shakespeare as a professional playwright, actor, poet, business man, and family man who lived in both London and Stratford-upon-Avon, tracing his path from a man of his time to a household name today.

More than 30 institutions contributed to the project, with the majority of the documents coming from the Bodleian Libraries at Oxford University, the British Library, The National Archives, and the Shakespeare Birthplace Trust as well as the Folger Shakespeare Library in Washington DC.

Shakespeare Documented launched with 200 documents, and the descriptive content will continue to be added, updated and expanded throughout 2016.

Heather Wolfe is curator of manuscripts at the Folger Shakespeare Library and holds a Ph.D. in English literature from the University of Cambridge. She has curated numerous Folger exhibitions and has written widely on early modern manuscripts and the intersections between print and manuscript. She has edited The Trevelyon Miscellany of 1608 (2007), The Literary Career and Legacy of Elizabeth Cary (2007), Letterwriting in Renaissance England (2004), an exhibition catalog co-written with Alan Stewart, and Elizabeth Cary, Lady Falkland: Life and Letters (2001). She is principal investigator for EMMO (Early Modern Manuscripts Online), an IMLS-funded Folger initiative to create a free and searchable database of images and transcriptions of early modern manuscripts created in England or written in English.

ABOUT THE FOLGER SHAKESPEARE LIBRARY

Folger Shakespeare Library is the world's largest Shakespeare collection, the ultimate resource for exploring Shakespeare and his world. The Folger welcomes millions of visitors online and in person. We provide unparalleled access to a huge array of resources, from original sources to modern interpretations. With the Folger, you can experience the power of performance, the wonder of exhibitions, and the excitement of pathbreaking research. We offer the opportunity to see and even work with early modern sources, driving discovery and transforming education for students of all ages. Join us online, on the road, or in Washington, DC.

Throughout 2016, the Folger Shakespeare Library is celebrating 400 years of Shakespeare with The Wonder of Will, including exhibitions, performances, special events, and more—at the Folger, online, and across the United States. Learn more at www.wonderofwill.folger.edu

ABOUT THE BODLEIAN LIBRARIES

The Bodleian Libraries at the University of Oxford is the largest university library system in the United Kingdom. It includes the principal University library – the Bodleian Library – which has been a legal deposit library for 400 years; as well as 30 libraries across Oxford including major research libraries and faculty, department and institute libraries. Together, the Libraries hold more than 12 million printed items, over 80,000 e-journals and outstanding special collections including rare books and manuscripts, classical papyri, maps, music, art and printed ephemera. Members of the public can explore the collections via the Bodleian's online image portal at digital.bodleian.ox.ac.uk or by visiting the exhibition galleries in the Bodleian's Weston Library.

ABOUT THE BRITISH LIBRARY

The British Library is the national library of the United Kingdom and one of the world's greatest research libraries. It provides world class information services to the academic, business, research and scientific communities and offers unparalleled access to the world's largest and most comprehensive research collection. The Library's collection has developed over 250 years and exceeds 150 million separate items representing every age of written civilization and includes books, journals, manuscripts, maps, stamps, music, patents, photographs, newspapers and sound recordings in all written and spoken languages. Up to 10 million people visit the British Library website - www.bl.uk - every year where they can view up to 4 million digitized collection items and over 40 million pages.

ABOUT THE NATIONAL ARCHIVES

The National Archives is one of the world's most valuable resources for research and an independent research organisation in its own right. As the official archive and publisher for the UK government, and England andWales they are the guardians of some of the UK's most iconic national documents, dating back over 1,000 years. Their role is to collect and secure the future of the government record, both digital and physical, to preserve it for generations to come, and to make it as accessible and available as possible.The National Archives brings together the skills and specialisms needed to conserve some of the oldest historic documents as well as leading digital archive practices to manage and preserve government information past, present and future.

ABOUT THE SHAKESPEARE BIRTHPLACE TRUST

The Shakespeare Birthplace Trust is the independent charity that cares for the world's greatest Shakespeare heritage sites in Stratford-upon-Avon, and promotes the enjoyment and understanding of Shakespeare's works, life and times all over the world. Established by Act of Parliament in 1891, the charity runs formal and informal educational programmes for people of all ages. It holds the world's largest Shakespeare-related museum and archives open free to the public, a collection which is designated as being of international importance. The Shakespeare Birthplace Trust receives no public subsidy or direct revenue funding; it depends on income generated through the support of visitors, donors, volunteers and Friends. For more information, visit  www.shakespeare.org.uk.