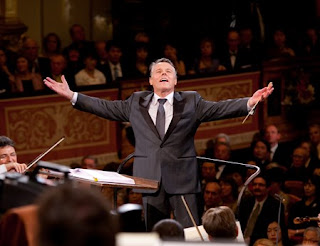 Susan Omand gets in a Viennese whirl as she watches the New Year’s Day Concert Live from Vienna...

Listening to the New Year’s Day concert from Vienna has become something of an annual “thing” for me and this year was no exception. 2016 marks the 75th anniversary of this hugely popular event and, as ever, the BBC’s coverage of the gala was second to none. Having started on BBC Radio Three earlier in the day, Petroc Trelawney introduced the televised 90 minute climax to the concert which began with the Overture to Johann Strauss Jr operetta A Night in Venice with, for the third time at the New Year’s Day Concert, Mariss Jansons conducting.

Jansons is always such an animated conductor, almost dancing on the podium and using both hand and baton expressively to get the best from what is, of course, a wonderful orchestra – he always looks like he’s having so much fun with the music and that translates into the way it comes across in the performance.

As ever with these televised concerts, I guess they feel they have to keep them visually entertaining to viewers less interested in watching the conductor and orchestra while the music is played so we got unusual views of the sumptuous Gold Hall with its highly decorated ceiling and ornate chandeliers as well as the close-ups of individuals in the orchestra at particularly complex bits of the music.

The overture was followed by Edward Strauss Ausser Rand und Band, polka schnell, for orchestra, Op 168, accompanied this time by a scene of horse racing and dancers from the Vienna State Ballet, leaping and twirling in their morning coats and Edwardian frocks, handily split to allow for easier dancing, as they cheered the horses on. And boy did the music gallop along too and, although I really enjoyed the dancing and the Imperial Pavilion they were in was beautiful, I would have loved to see Jansons bopping about on the podium as he conducted this one.

A definite change of pace for the next piece as we were treated to the sumptuous Josef Strauss
Sphärenklänge. Walzer, op. 235, a tone poem written in 1868 for the annual Medical Association ball of all things. I was pleasantly surprised by the liveliness of this piece as Viennese waltzes tend to sound like the circular flow of the dance, if you know what I mean, but the use of audible percussion, sudden changes in volume and harp and staccato strings it held the interest very well, although I believe it would be quite difficult to dance to.

It was Mariss Jansons’ particular wish that the Vienna Boys Choir were part of the gala and they performed Johann Strauss, Jr. Sängerslust. Polka francaise, op. 328, looking and sounding suitably angelic in their sailors’ uniforms. The accompanying film saw them having fun at a photo shoot and running and playing in the wonderful gardens of the Musikverein before playing less formal games of table tennis and football at their school (I assume). As for the singing, the close harmony was wonderful but I could have done with the sound balancing better to make the singing clearer as it tended to get a bit drowned out by the more forceful orchestra. .

The choir stayed on stage to perform Josef Strauss Auf Ferienreisen. Polka schnell, op. 133, a composition which makes good use of the student songs of the time. Again the voices could have been stronger as the brass section tended to carry the tune but the boys did very well and it was a fun piece, including the (planned) cheering and heckling from the orchestra.

Back to Johann Strauss, Jr. next and a short extract from his opera Fürstin Ninetta, the story apparently revolving around a cross dressing Russian Princess and a hypnotist who is mistaken for a mass murderer, set in the seaside town of Sorrento. Um. Yes. This was a completely new piece for me and it flowed beautifully. Thankfully too we got to watch the orchestra this time and it was very enjoyable. I shall seek out the full opera at some point and give it a go.

From Italy to Spain (sort of) for the next piece and the “French Johann Strauss”, Èmile Waldteufel’s reworking of fellow Frenchman Emanuel Chabrier’s rhapsody, Espana. Walzer, op. 236. I know the rhapsody itself quite well so it was interesting to see how it had been re-arranged while still being recognisable and it bounced along nicely, sounding as Spanish as I’d hoped, even including flamboyant castanets and flamenco fans (don’t ask). 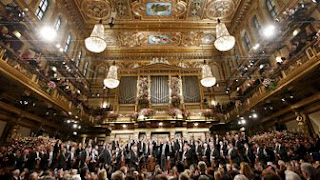 Something completely different followed and a Ball-Szene (ball scene) from Josef Hellmesberger sen. The complex fast bowing of the violins at the start, sounding almost like running, was beautifully counterpointed by the sharp plucked notes of the harp and the bass. A seamless move into a wonderful waltz tempo before returning to the allegro at the start. Beautifully done.

Another speedy piece next with Johann Strauss, sen. Seufzer-Galopp, op. 9 which includes a couple of “musical sighs” in the middle of it. Yes, really, you can hear it in the violins as they all break and exhale a few times before picking up the pace again. This is one time I was glad of the close-ups on the orchestra so that I could watch their expressions as they caught their collective musical breaths. Needless to say Jansons kept his cool throughout and held the orchestra to tempo with a tight rein.

From father to son and Josef Strauss with Die Libelle (The Dragonfly). Polka mazur, op. 204. Even though this is a polka, its tempo is much smoother than normal, evoking a certain sadness underneath the usual bounce of a polka and this trait is evident in a lot of the younger Strauss’ work. All it needs is a transposition to a minor key to be utterly melancholy. I did enjoy the nice camera touch though of focussing in on dragonfly ornaments cunningly hidden among the floral arrangements surrounding the orchestra and supplied by the Viennese municipal gardens.

Gorgeous surroundings and beautiful ballet accompanied one of the better known Strauss waltzes as the dancers returned for the next piece, among the halls and gardens of the Schönbrunn Palace with Johann Strauss, Jr. Kaiser-Walzer, op. 437. It really helped that I knew the music because the dancing and settings, especially the stunning fountain, really diverted my attention from the music which, in a way, says a lot for the choreography as, had it jarred, it would have been very noticeable.

The final piece listed on the programme was another Johann Strauss Jr work, a polka this time, Auf der Jagd. Polka schnell, op. 373, taken from an opera Cagliostro about an occultist count who is also a con man and master imposter (who says operas are boring?!) Again this was a tune that I knew, including the interesting use of planks in percussion, mimicking the whip cracks of the hunt in the name.

And, with loud and long ovations for Mariss Jansons as he left the stage, that was it for the New Year’s Day Concert for 2016.

It’s now traditional that there are encores. The first of these was the high speed Im Sturmschritt, Polka schnell op 348 (known as At the Double) from Johann Strauss Jr, which was played brightly and, yes, at the double, even though the orchestra and Jansons must have been tiring by that point.

The concert always finishes with two of the very best known Strauss works, a rousing rendition of the waltz By the Beautiful Blue Danube (or just the Blue Danube), accompanied by a lovely flythrough film of the Viennese countryside following the river itself from the air, and a final belt through The Radetzky March, which has featured on screen in things as diverse as Ren and Stimpy, Hugo and Battle Royale, accompanied by much audience participation and clapping, encouraged by our enthusiastic conductor.

Then it really was finished for another year. The thing I enjoy most about the New Year’s Day Concerts is that, unlike the Proms concerts, which I will be covering later in the year (so be warned) the selected works are always short so a great number and variety can be packed into the 90 minute concert. As I’ve said already, the visuals for me were sometimes distracting from the music but I can completely understand that they are there to add interest for those who are maybe not as keen as I am on watching the conductor and orchestra at work. So, all in all, a very enjoyable, and not overly hangover harming, way to start another year.