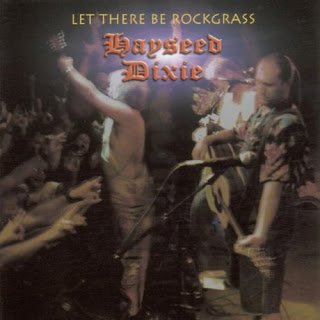 Susan Omand heads for Hillbilly country to explain the appeal of Hayseed Dixie...

Let me start by saying this.... imagine Motorhead’s Ace of Spades played on banjos. Got that? OK. Now stop imagining because it’s on this album. Yes, really (the video is at the bottom here). Along with songs made famous by Queen, Rainbow, Aerosmith and the band Hayseed Dixie named themselves after (AC/DC – see what they did there?) among many more rock giants (and also The Darkness).

As a band, they started back in 2000, deep in the Appalachian mountains of Tennessee, playing traditional mountain bluegrass until an incident, which may be utterly apocryphal but best described on their own website bio:

“All of this changed abruptly one afternoon when a stranger crashed his car into a stately old oak tree on a particularly dangerous curve, which the locals refer to as the “Devil’s Elbow.” Sadly, the stranger expired, but his legacy lives on! As the boys searched through the wreckage looking for identification, they discovered several vinyl AC/DC albums. After playing these back on an old Edison 78rpm Victrola, everyone agreed that the songs were right fine country music . . . and that the Lost Highway of Brother Hank Williams and this Highway To Hell of AC/DC were indeed the exact same damn road!”

And that, dear reader, is completely the appeal of Hayseed Dixie. They take rock anthems and substitute banging baselines and wailing guitars with twanging banjos and flailing fiddles. If you loved the Devil’s tune in The Devil Went Down to Georgia or the Duelling Banjos of Deliverance, you will love these guys. The slight issue comes when they do their own songs, rather than covers, because they lose that unique selling point and become just another, albeit quite good, bluegrass band. So be careful which of the 15 plus albums you get as some have fewer covers on them than others.

Let There Be Rockgrass, their fourth album, is my favourite so far – although I’ve not heard their newest one yet (Hair Down to My Grass). All but three of the tracks are rock covers and some of these are the live version which really adds to the atmosphere with the whoops and hollers from the crowd. Of the three songs that aren’t covers , Corn Liquor is a pretty good attempt at their bluegrass version of a rock song that they wrote themselves, if you see what I mean. It sounds like it’s a cover but it isn’t. The aptly named “I’m Keeping Your Poop” does however live up/down to expectations as a wonderful parody of these “the wife done left me, the dog died and now I’m all alone” type country songs. The final non-rock track, which I love as a traditional country gospel song anyway, is Will the Circle Be Unbroken and is really well done but an unusual choice to round off what is essentially a rock album, which would have been best concluded with Highway to Hell to my mind.

As for the rest, well, it just makes me smile. They are all very cleverly adapted from the original rock tracks – and the twang of the Jew’s Harp on Aerosmith/Run DMC’s Walk This Way is a stroke of genius. So dig out your jug of moonshine, don a tartan shirt and stick a bit of straw in your mouth... this is hard rock hillbilly style.