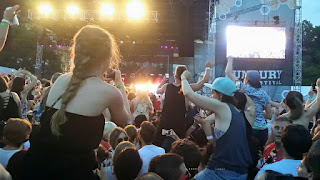 Ahhh the summer. Remember way back then? The warmer rain, the odd glimpse of sunshine, the very loud music from all the great gigs and festivals that Nate McKenzie went to... here's his round up...

The greatest part about seeing your favourite musicians play live, aside from the music itself, is the interaction with people in the crowd around you. I met numerous people over the past year at shows I attended with my girlfriend that I will not be forgetting any time soon. At Damien Rice we met a thirteen year old girl and her Dad; it was her first concert and she had insisted that it had to be Rice. Her Dad had a breadth of musical knowledge and was great to chat with; but getting to see a young person, who shunned the likes of One Direction or Taylor Swift, in lieu of seeing a musician as mature and intellectual as Damien Rice was a bit bolstering to the soul. It sort of gives one hope for the future to know that the new generations are going to continue to patronize quality music.

For myself personally, the summer concert season was one of the best I have been able to participate in. From Bunbury in Cincinnati, Fashion Meets Music Festival in Columbus, and a random smattering of other shows, the lineups and tours available had so much potential. FMMF was the only one that sort of disappointed, but not because of the music; the crowd simply wasn't very large.

I am by no means an impartial observer when it comes to music. I am a fan. I go to shows to get as close to the stage as I can, scream as loud as my voice will allow, and sing along with every ballad I'm treated to.

Throughout the past year I saw some amazing acts I had been trying to get to for a few years, and saw a few others that I have heard live before but wanted to enjoy again. My favorite band of all time, Brand New, put on a raucous show at Bunbury that was the very definition of face-melting. Likewise, AWOLNATION made the buildings of the Arena District in Downtown Columbus, Ohio reverberate with their power rock hit Sail.

Lights, the tiny Canadian pop-punker with the big voice invigorated the crowd with her newest single Up We Go. At one point, I almost lost my girlfriend to blues-rock soulman, Shakey Graves, as he swooned her with Roll The Bones. I can't exactly blame her. Look at him. 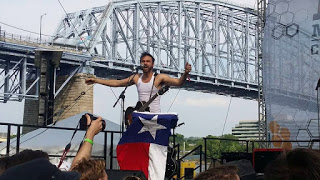 Of course, she had to put up with my fawning over pixie violinist Lindsey Stirling who (I am 100% sure) was playing directly to me when she played a ballad of nerd anthems that included the Legend of Zelda theme. So, I'd say we're even.

There were a ton of great shows. However, there were a few particular performances that stand out as the best of the year.

The Avett Brothers - I won't pretend that I'm the worlds biggest Avett Bros. fan. I was not actually all that familiar with much of The Avett Brothers music before I saw them live. But my girlfriend was psyched for the show and she has amazing taste (except in men, obviously) so I figured this would be a good one. It turned out to be one of the best concerts I've ever been to.

Amidst a set full of fan favorites, they threw in a cover of Country Blues by Doc Watson and country music staple The Race Is On by George Jones. But the highlight of their show was the final three songs: Kick Drum Heart, Geraldine, and Morning Song. I had never pictured myself paying money specifically to see a country-esque band before but immediately following their show I was looking up tickets to see them again.

Walk The Moon - Walk The Moon had arguably the song of the year with their hit Shut Up And Dance. It is almost impossible to hear that song and not feel like moving, or at the very least, singing along. Their performances are no different.

Playing to a hometown crowd in their native Cincinnati, Ohio effervescent lead singer Nicholas Petricca showered the attendees with sincere gratitude and appreciation for supporting the band. They started of the set with a rendition of Circle Of Life which felt like the sweetest kiss hello from a long-lost friend. Shut Up and Dance might be their biggest hit so far, but Anna Sun and Work This Body are just as fun to listen to.

However, covers are always a big hit with live crowds and when Walk The Moon began the intro to All These Things That I Have Done by The Killers the crowd went into a frenzy. One of the most talented and genuinely lovable bands in music right now, Walk The Moon deserves all the praise they are starting to get.

Andrew McMahon in the Wilderness - With the release of his new album of the same name, Andrew McMahon in the Wilderness filled a void in the lives of many Indie-pop fans that we they didn't realize needed filled. His performance at Fashion Meets Music Festival in Columbus, Ohio was easily one of the best shows I have ever seen. Playing to a crowd of only a few hundred, McMahon engaged his fans in a way I've seldom seen. Having only about an hour for his set amidst the other acts, I wasn't expecting to hear any of his older songs from previous projects. But I was pleasantly surprised when the first notes of the second song began and I immediately recognized Dark Blue, his biggest hit from his time as the frontman of Jack's Mannequin. The rest of the set was a mix of songs from ...in the Wilderness, Jack's Mannequin, and the band that made him an alt-pop emo icon, Something Corporate.

The best part of the show, however, was when McMahon brought out a giant multi-colored parachute and passed it out to the crowd. 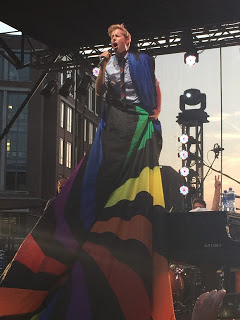 Conjuring up memories of elementary and junior high school, he instructed us to pull the parachute over our heads, the way we used to do years ago in gym class. He then jumped into his finale, the feel-good anthem Synesthesia, while everyone went crazy underneath the dancing parachute. When McMahon himself jumped off the stage and came into the midst of the mob, the energy was electric.

The crowd may not have been the size he is used to playing but Andrew McMahon made the most of it. Absolutely incredible.

Twenty One Pilots - If you have not listened to TOP I can not express to you how much you are missing out. They have a sound that can not be quantified or categorized by any mertic that man has thus far devised. Rock? Sure. Rap? Yep. Pop? Definitely. Screamo, soul, instrumental. Yes, yes, and yes.

In just the last two years, TOP has gone from relative unknowns to playing in front of thousands, selling out arenas world wide. At Bunbury in Cincinnati, the crowd was 20,000 strong. 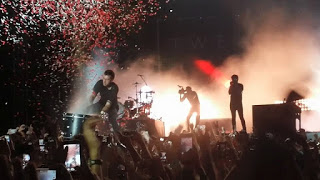 It seemed as if every person at the festival was there to see them, and knew every word to every song. As a former (ok, current) emo kid, it was great to hear a band with such relatable lyrics play to a crowd of people that sang along like they were at a Dashboard Confessional concert. It was 85 degrees that day but no one cared. The sweat-drenched crowd packed together and surged forward to get as close to the stage as possible while Tyler Joseph and Josh Dun ran through all of the fan favorites, including Heavydirtysoul, Guns for Hands, and their biggest hit (at least with fans) Car Radio.

The highlight of that entire weekend (and possibly my summer) was when Tyler addressed the crowd and informed us that they were going to film the live performance part of their upcoming single, Lane Boy (second single off the newest album Blurryface) for the video that would be released later in the summer (at the bottom of this article too). Predictably, we all went insane.

Damien Rice - The venue was packed and the anticipation from the crowd was a tangible cloud overhead. Rice was almost an hour late getting out on stage, for whatever reason, but no one seemed upset, only more anxious to hear him. The Irish singer doesn't tour North America often (or anywhere for that matter) so the opportunity for longtime fans to see him perform live outweighed any feelings of impatience. We all knew we were about to see something special. It was that and more. Cannonball and Volcano bookended a perfect mix of his new and old stuff, as he blended personal stories about the origins of Amie, The Box, and The Professor & La Fille Danse. As an encore, we were treated to an absolutely powerful rendition of It Takes A Lot To Know A Man. The climax of the song culminated in Rice using an on stage recorder and jumping to multiple instruments, layering the impromptu sounds into a building crescendo. The result was a virtual wall of sound pressing into your face as he quietly walked off stage, giving a wave and a bow to the crowd.

It took almost two hours for Rice to get through fifteen songs. I've been to concerts that were only two hours that included two openers and a headliner. Musicians can do a lot to create energy and deliver a quality concert for attendees, but it is almost impossible to manufacture a connection with a crowd that elevates the show to a level beyond just being a "performance". Damien Rice makes it clear that his fans are important to him not just as voyeurs watching him on stage but as participants in his emotional journey through the words and the music.

I am not one for indoctrination, but you can bet my son is now listening to these bands when he is with me, just as I listened to Led Zeppelin, Pink Floyd, John Prine, and Joe Walsh growing up. Much like that young girl at the Damien Rice show.

Live music is always great; but great live music is what creates lifelong fans that want to share their adoration for a band with their kids. That's how bands become immortal.