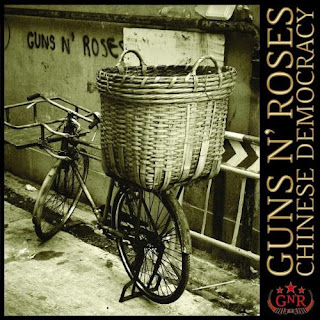 Steve Taylor-Bryant argues with anybody listening about what counts as a Guns N' Roses album...

A while ago a friend and I were debating where Chinese Democracy fits in the life of Guns n Roses. I personally believe it's their greatest album and my friend states it doesn't sound like a Guns record. Fair enough I thought, others opinions are always welcome so that's the conversation over and done with then? Er... No! I just couldn't let it lie and so went back to my musical youth (pass the duchy) and listened to every album again. I discovered something I hadn't noticed before, there is no such thing as a Guns n Roses record.

GnR Lies was four punk edged, alcohol fuelled, high octane live tunes and four slower ballad types. Appetite for Destruction (Twenty eight fucking years old! Jesus) is often held up as the band's best album and I get that view, it's a massive album, an important release and contains no weak songs and yet still isn't my favourite but we'll get to that. Then came the Use Your Illusion epics, and the 13 live shows I attended in about 4 years are still my greatest show experience but the albums were different again. Matt Sorum taking up the sticks added the missing professionalism the back end needed and added horns, strings and piano changed the sound again. Not one track from either I or II would fit on Appetite and the tracks from Appetite would seem out of place on Illusion. The differing styles across the two records means there is no distinctive GnR sound. It's a very good mish mash of punk sensibilities, honky tonk Rock n roll, orchestral epics and karaoke tunes that have kept me entertained for years but can you honestly say Bad Apples or Get In The Ring are a distinctive GnR sound?

Then we had the highly entertaining but musically inept Spaghetti Incident that showed a little of the songs that went into the GnR machine and transferred out as Mr. Brownstone and the like. Then years and years later we finally received the highly anticipated Chinese Democracy. My favourite Guns n Roses album. Lyrically brilliant, musically as good as what came before and my favourite because it's the latest. It's that simple. Yes it's not the original line up and I understand the Slash fans knocking it because it's an Axl record, but weren’t they all? In 'the good old days' it was Axl and Izzy that were the heart of GnR's writing. Don't you think it's strange that Slash missing a recording becomes a hype and yet when Sorum replaced Steven Adler it was Steven who? Chinese Democracy also didn't feature DJ Ashba but if you've caught GnR live in recent years you'll agree he's a powerhouse of the stage and more than able showman to fill the boots of Slash and Dizzy Reed is now the second longest lasting member after Axl himself.

Guns n Roses never had the sound you think you miss now Slash and Duff are gone, the writing is different on every album and whilst I always hope for an Izzy and Axl project again we are never going to have one. Listen to Chinese Democracy again fresh with the knowledge that there is no such thing as GnR in classic sound terms and you'll find a very well put together record. Here's to the next one, with another tweaked line up and Axl writing like only he can then that album will become my favourite unless it's a Spaghetti sequel.