Opinion - The Art of Stephen Hickman 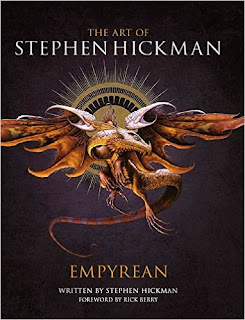 Susan Omand delves into the lands of drawn dragons as she reads about The Art of Stephen Hickman, thanks to Titan Books...


I cannot say it often enough, I love Titan Books’ art books. They are always laid out so well, with the writing, although important and fascinating, not overshadowing the wonderful art showcased in the volume, and the same is the case with this book of fantasy art from Stephen Hickman. Who? If you have SF or Fantasy books on your shelf, you probably already own some of his work as he has created illustrations and covers for the great and the good of the genre, from Robert Heinlein to J R R Tolkien, Larry Niven to Neil Gaiman and many of them are in this book.

As with all fantasy art, the book has its fair share of dragons and naked women on show within the pages, all beautifully posed and painted of course, but there is also a lot of stunning art deco influenced architecture and retro-futuristic, steampunk influenced spacesuits within the artwork too. And, as well as the lavish full colour finished works, Hickman has included a lot of the preliminary sketches and work in progress images so it is fascinating to see the artistic process evolve. Like all good book cover art, the completed pictures are meant to tell the story of the books, rather than their own narratives, and Hickman expertly achieves this, with many of the book covers being recognisable for their stories. But this book also allows the stories behind the paintings to be told. We get these straight from the artist himself and they are incredibly interesting, detailing where the influences came from and why he made the artistic decisions he did for subject, colour and composition. As an artist, I was also really fascinated by the technical notes included with each image but I can see that they wouldn’t be that interesting to people who don’t really care about why the underpainting should have been in Mars Violet rather than Burnt Umber (yes, it did make a difference to the end result) so it was good to have them in separate footnotes.

One thing I really like about Hickman’s work, and it’s going to sound silly, is that they look like paintings. What I mean is they’re not airbrushed to a sanitised death or made to look overly photo-realistic like a lot of fantasy art, there is still a lot of soul in the characters and you still get an emotional hit from the art itself. As Rick Berry says in his foreword to the book “Not a thing goes unconsidered” and it’s true. There are no “lucky” brush strokes in the creation of Stephen Hickman’s art, this is pure artistic ability, beautifully presented.