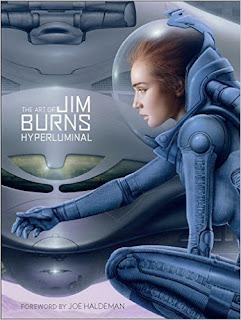 Susan Omand is on another planet as she immerses herself in The Art of Jim Burns: Hyperluminal from our friends at Titan Books...

Jim Burns name may not be one that is known to you but I can guarantee, if you have science fiction books in your collection, you more than likely have some of his work. He has worked with such stalwarts as Robert Silverberg, Greg Bear, Anne McCaffrey and Neil Gaiman. He is also the only non-American artist to have won a Hugo award, having garnered three at the time of writing.

With the emphasis firmly on the living, and mostly female, form, I was very much reminded of the work of Chris Achilleos back in the day. While Achilleos’ artwork was definitely more of the photorealistic character study, Jim Burns’ pictures give you much more of a sense of place and back story to each of the pictures. What Burns’ work misses in photo-realism, it more than makes up for with colour as each plate in this beautiful book is a feast for the eyes. His work also has a softness that is often missing from Achilleos’ work, which adds to the femininity and sensual, rather than sexual, nature of the pictures.

Interspersed with the pictures, Burns himself takes you through his growth in art and how, even from a young age, science fiction captured his imagination. He says in his narrative “I read a book as if I were watching a film” and that science fiction provided the visuals in his mind’s eye. This love of the genre, the fact that he understands the work and the worlds of the authors he works for, really shows through in his work, as you find yourself transported to other worlds with a feeling and emotion often missing in other science fiction/fantasy art. He also talks about his transition from the more traditional pencil, oil and acrylic to the digital medium and laments the “skeletal implausibility of dragons”.

As always the production of the book itself by Titan Books is second to none. The paper is incredibly high quality and the colours vibrant making for a visually stunning representation of one man’s career in art. If you have an interest in the fantastic and fantastical artwork of science fiction book covers, this is definitely a book for you.