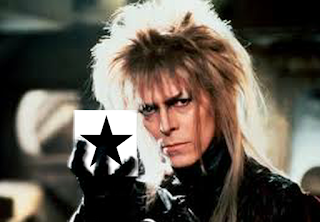 A shock revelation swept the world today when somebody pointed out that David Bowie's new album of songs weren't actually very good.

In actuality, Mr Bowie – it's rumoured – hasn't really been releasing any decent music since the soundtrack of 'Labyrinth'. In this film, he's remembered for the bulge in his tights and, with balls that big, it's clear why he can release any old rubbish and still get labelled a genius.

A spokesman for Mr Bowie said: 'Turn back, Sarah! Turn back before it's too late.' When we pushed him further, he just said: 'How you turn my world, you precious thing.'

So, hipsters beware! Just because something is hard to listen to, to like, or to embrace, it doesn't mean it's fashionable to do so. Until Mr Bowie apologises for Tin Machine, then he's on rocky ground. And not 'rocky' in the musical sense, either.

To the millions who've pre-ordered the new album 'Blackstar', we urge you to heed Mr G. Jent's revelation and go and pop a stripey onesie on to jump around to 'Magic Dance' instead. Either that, or fiddle with your stress balls until Major Tom is floating in a most peculiar way.