News - Secrets of the Mona Lisa 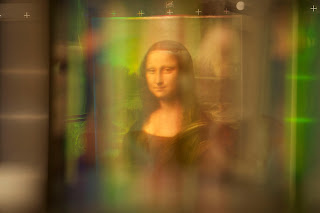 A new BBC Two documentary tonight unveils research which rewrites the story of the Mona Lisa...

For 500 years, the Mona Lisa has remained a mysterious and enigmatic portrait. Mystery remains over the subject’s identity. There are theories that Leonardo painted more than one version and there are conflicting dates about when the painting was commissioned and finished.

Now, new research and improved technology are revealing a trail of new clues that could unveil, once and for all, the secrets of the Mona Lisa. These new findings, revealed for the first time in a BBC Two Arts documentary to be screened tonight (Secrets Of The Mona Lisa, 9pm, BBC Two), could rewrite the history of the Mona Lisa.

Armed with exclusive access to new evidence, this landmark film, presented by art historian Andrew Graham Dixon, embarks on an investigation using the latest optical, forensic and historical tools and techniques. Stage by stage, art historians, authenticators, forensic specialists and academics attempt to uncover the secrets that have eluded us for years. Secrets Of The Mona Lisa examines new evidence that the painting hanging in the Louvre may not be the original Lisa.

In 2004, Pascal Cotte, one of the world’s leading experts in art conservation and the analysis of paintings, began to scan the Mona Lisa - one of only two people ever to be allowed by the Louvre to analyse the Mona Lisa using scanning technology.

Cotte has invented a revolutionary new technique to unlock a painting’s hidden secrets, finding lost layers previously undetected by other tests. His ground-breaking multispectral camera projects 13 different wavelengths of colour onto a picture, each penetrating the paint surface to different depths. The camera captures the reflections, generating over 3 billion bits of data and thousands of images. By analysing each image, shown in black and white, Pascal can reveal a painting’s secrets layer by layer. After a decade of working in secret and developing his new method, he reveals that:
Under the Mona Lisa there are, in fact, three different paintings.

One is an early study of a head and another is a Madonna-style portrait with an extraordinary headdress.  The most surprising finding is the third hidden portrait. Cotte believes that this is the original portrait of Lisa del Giocondo (also known as Lisa Gherardini) – the Florentine merchant’s wife Mona Lisa - painted in 1503. This extraordinary finding finally resolves the Mona Lisa mystery: Leonardo did paint more than one portrait of Mona Lisa. It lies underneath the one we know in the Louvre. 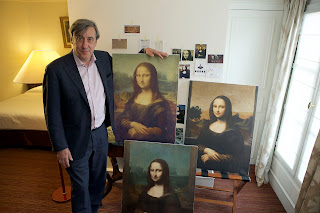 The programme reveals the hidden, earlier portrait with startling clarity, demonstrating for the first time exactly what the young Mona Lisa really looked like, both digitally and with the help of a model and Renaissance costume historian. It reveals the secret of her enigmatic smile and how Leonardo painted, scratched out and then repainted all three works. It reveals how all the key features changed, how the old paintings and their details were carefully camouflaged and hidden.

Pascal Cotte says: “The Mona Lisa is one of mankind's great mysteries. With over 9.7 million admirers per year, it is the most legendary painting of all time. My scientific imagery technique (LAM) takes us into the heart of the paint-layers of the world's most famous picture and reveals secrets that have remained hidden for 500 years. The results shatter many myths and alter our vision of Leonardo’s masterpiece forever.”

Andrew Graham Dixon commented “This has been a fascinating journey to have been on, a real voyage of discovery which has given me the opportunity to understand the Mona Lisa as never before. I have no doubt that this is definitely one of the stories of the century.”

Malcolm Brinkworth, Executive Producer, added: “These revelations change everything we thought we knew about the Mona Lisa. This film and Cotte’s pioneering work unlock the hidden truths of history’s most iconic portraits. It marks an extraordinary moment in the history of art.”