News - Leads Cast in Harry Potter and the Cursed Child 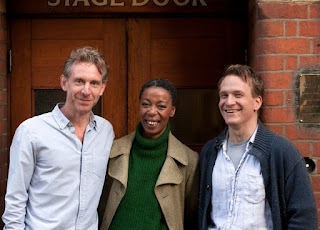 This week, the producers of Harry Potter and the Cursed Child announced the lead cast...


Directed by John Tiffany, Harry Potter and the Cursed Child is a new play by Jack Thorne based on an original new story byJ.K. Rowling, Jack Thorne and John Tiffany. Jamie Parker, Noma Dumezweni and Paul Thornley will lead the cast as Harry, Hermione and Ron.

Harry Potter and the Cursed Child will receive its world premiere in London’s West End at the Palace Theatre in the summer of 2016 and is the eighth story in the Harry Potter series and the first official Harry Potter story to be presented on stage. Further casting for the Company of over 30 will be announced at a later date.

It was always difficult being Harry Potter and it isn’t much easier now that he is an overworked employee of the Ministry of Magic, a husband and father of three school-age children.

While Harry grapples with a past that refuses to stay where it belongs, his youngest son Albus must struggle with the weight of a family legacy he never wanted. As past and present fuse ominously, both father and son learn the uncomfortable truth: sometimes, darkness comes from unexpected places.

J.K. Rowling said: “I’m so excited with the choice of casting for Harry Potter and the Cursed Child. I can’t wait to see Jamie, Noma and Paul bring the adult Harry, Hermione and Ron to life on stage next summer.”

When pressed by fans over the casting on social media, Ms Rowling tweeted further clarification:

Jamie Parker is currently playing Sky Masterson in Guys and Dolls at the Savoy Theatre, a role he previously performed at Chichester Festival Theatre where he has also been seen in Drama, Holes in the Skin, Seagulls, The Coffee House, The Commuter and The Gondoliers. His other theatre credits include High Society at the Old Vic, Assassins and Proof for the Menier Chocolate Factory, Candida for the Theatre Royal Bath, Cat on a Hot Tin Rooffor the West Yorkshire Playhouse, Henry V, Henry IV Parts One and Two, A New World and As You Like It for Shakespeare’s Globe, King James Bible, The Revenger’s Tragedy and The History Boys all for the National Theatre the latter also on Broadway, Racing Demon for Sheffield Crucible, Rosencrantz and Guildenstern Are Dead for the Theatre Royal Haymarket and Chichester Festival Theatre, My Zinc Bed for the Royal & Derngate Theatre, Singer for the Tricycle Theatre, At the Exit for Chichester Edge, Between the Crosses for the Jermyn Street Theatre and The Sneeze and After the Dance for Oxford Stage Company.

His film credits include The Lady in the Van, Le Weekend, Valkyrie, The History Boys and Lawless.

Noma Dumezweni is currently playing the title role in Linda at the Royal Court Theatre for which she received outstanding reviews. Her other theatre credits include A Raisin In The Sun for the Young Vic at the Lyric Hammersmith, for which she was the recipient of the Olivier Award for Best Performance in a Supporting Role, Feast and Belong also for the Royal Court,A Human Being Died That Night at the Hampstead Theatre, The Fugard and The Market theatres in South Africa and Brooklyn Academy of Music, NY, Carmen Disruption for the Almeida Theatre, ‘Tis Pity She’s A Whore for Shakespeare’s Globe, Henry Vat the Noël Coward Theatre, President of an Empty Room and The Hour We Knew Nothing of Each Other for the National Theatre, Macbeth, Breakfast With Mugabe, The Winter’s Tale and Romeo and Juliet for the Royal Shakespeare Company and The Bogus Woman for The Red Room, Traverse and Bush theatres.

Her film credits include The Incident, Dirty Pretty Things and Macbeth.

Her many television credits include Casualty, Capital, Frankie, Dr Who, Summerhill, EastEnders and Fallout. Dumezweni will make her directing debut at the Royal Court Theatre in February with I See You by Mongiwekhaya.

Paul Thornley played the role of Dodge in London Road at the National Theatre before going on to play the same character in the film version, both directed by Rufus Norris. His other theatre credits include A Chorus of Disapproval at the Harold Pinter Theatre, The Three Musketeers for Kingston Theatre, It’s a Wonderful Life for the Wolsey Theatre, Ipswich, The Miraclefor the National Theatre, Private Fears in Public Places at the Stephen Joseph Theatre, the Orange Tree in London and the 59E59 Theaters in New York, Noises Off at the National Theatre, Piccadilly and Comedy Theatres, Spend, Spend, Spend for West Yorkshire Playhouse and the Piccadilly Theatre and A Midsummer Night’s Dream, All’s Well That Ends Well, The Tempest, Kiss Me Kate all for the Regent’s Park Open Air Theatre.

As well as London Road, Thornley’s film credits include Man Up, Metamorphosis, The Somnambulists, Les Miserables, Camera Trap and, most recently, Grimsby, the new Sacha Baron Cohen film. Thornley is currently filming The Crown for Netflix and will also appear in the as yet untitled forthcoming James Marsh film.

Previews begin 7 June 2016 with the Opening performances of Part One and Part Two on Saturday 30 July 2016. Harry Potter and the Cursed Child is currently booking to 27 May 2017.

Harry Potter and the Cursed Child will be directed by John Tiffany with movement by Steven Hoggett, set designs by Christine Jones, costumes by Katrina Lindsay, music by Imogen Heap, lighting by Neil Austin, sound by Gareth Fry, special effects by Jeremy Chernick, illusions by Jamie Harrison and musical supervision by Martin Lowe.

Running times for Part One and Part Two will be announced at a later date.