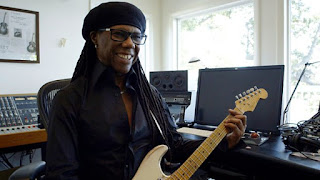 BBC Four has announced a new three-part series exploring the untold history of the pop and rock worlds, the ‘Music Moguls,’ and a new documentary called Top of the Pops: The Story of 1981...

Narrated by Simon Napier-Bell, Nile Rodgers (pictured) and Alan Edwards, Music Moguls, due to transmit in January 2016, will take viewers on an exclusive tour of the music industry in the company of a small group of hugely influential insiders and their artists. Between them they have shaped the face and sound of popular music loved by audiences around the world.

The series is a different take on the traditionally told tales of debauchery, excess, and exaggeration recounted by the artists, the bands and their hangers-on. This is the secret, and untold, history of the pop and rock world from the mouths of the men and women who pull the strings from behind the scenes. It is the story behind some of the biggest records of the last 60 years, and a chance for the unsung heroes of the industry to take centre stage and reveal their secrets.

With first-hand testimony and exclusive ‘show and tell’, from both the Moguls and their artists, the series will reveal how these powerful Svengalis emerged, multiplied, and evolved. The series looks at the tricks of the trade and how the music industry has today become more powerful than ever.

Pauline Law, BBC Executive Producer, Music Moguls, says: “This has been a fascinating series to make, meeting the movers and shakers behind the scenes who have really shaped the history of rock and pop.”

Also transmitting in January is ‘Top of the Pops: The Story Of 1981’, narrated by Mel Giedroyc and looking at the year that the 80s really took flight. This was the year that youngsters from a burgeoning national club scene fashioned a joyful New Pop and took the show by storm. From Birmingham’s Rum Runner club came high fashion Duran Duran, from Crocs club in Southend came a fresh faced Depeche Mode, and from the Crazy Daisy in Sheffield came the schoolgirls, Susan and Joanne, who co-fronted the Human League.

All, unlike their Punk predecessors, embraced Top of the Pops with a new take on Pop music. Music videos came of age, with brilliant promos from Ultravox and Visage (from London’s Blitz club scene), and Adam Ant. This meant bands no longer had to perform in the Top of the Pops studio but could send in cutting edge videos, like Ultravox's Vienna.

Top of the Pops embraced these changes and transformed - with special props and sets - along with a change of the long-running theme tune to Midge Ure’s Yellow Pearl, and a dazzling new title sequence with falling coloured records. Legs & Co made their final appearance, replaced by dancers, many of them young club kids, as ‘cheerleaders’ in the crowd. This pushed an 80's party atmosphere, much to the disapproval of a young Kim Wilde who didn’t want them near her, but to the delight of Leee John, whose band Imagination spearheaded a new Britfunk genre that flourished on Top of the Pops.

All this as Britain was torn between rioting, unemployment and the Royal Wedding - a mood captured perfectly in The Specials’ Ghost Town, which the band performed on Top of the Pops as it hit No 1 - and then promptly split up in their dressing room at Television Centre on the show’s 900th edition in July.

Top of the Pops is a staple of BBC Four and with continuing weekly repeats of shows year by year, this special documentary marks reaching 1981. This is the sixth annual documentary on the Top of the Pops years which began with The Story of 1976 in 2011, using the show as a barometer of the year in pop and a mirror to the BBC and the nation.

Cassian Harrison, Editor, BBC Four, says: “I’m delighted to showcase Music Moguls and this brilliant Top of the Pops special on the channel. BBC Four is the home of music on TV, and these new programmes demonstrate exactly the type of original and entertaining content that music fans tune in for. Both are a fascinating, in depth look into the moments and people that shaped pop history and are still remembered today.”

Episode one of Music Moguls meets the managers behind some of the most important moments in pop history, including Simon Napier-Bell who launched the careers of artists throughout the decades, from The Yardbirds to Marc Bolan, to Wham!. The episode tells stories about legendary managers such as Elvis’s Colonel Tom Parker, The Beatles’ Brian Epstein, Led Zeppelin’s Peter Grant, The Sex Pistols’ Malcolm McLaren, and Don Arden who managed Small Faces, Black Sabbath and ELO.

Filming takes viewers to the jungles of Columbia where Andrew Loog Oldham speaks about how he helped make the Rolling Stones one of the most successful bands of all time. Jon Landau explains how he saw the future of Rock ‘n’ Roll when he discovered Bruce Springsteen, and Scooter Braun talks about how he happened to click on a YouTube video of a young Justin Bieber...

Simon Napier-Bell says: “Artists are so driven and motivated to that one point that they very, very frequently miss seeing all the opportunities which would help them get there. And managers are really opportunists, hired to harness themselves to the artist's motivation and one way or another, show them the way.”

With extremely rare access and exclusive interviews, episode two explores how producers create the signature sounds that have defined key periods in pop history, and looks at how advances in the technology behind production have shifted the musical landscape.

The episode includes a first time examination into how David Bowie’s seminal song Heroes was recorded, as producer Tony Visconti for the first time takes the audience through the isolated tracks of the recording. Nile Rodgers gives an insight into his seismic contributions to pop, plus Trevor Horn speaks about why he has been credited with inventing the 80s. Paul Epworth explains how he created some of the biggest selling hits of our time, such as Adele’s Rolling in the Deep, and Mark Ronson talks about his own meteoric rise to fame.

Nile Rodgers says: “I thrive on that moment of interpreting the artist’s vision, coming up with a concept, like Diana Ross, I’m Coming Out. I like writing the beginning of something. It’s cool. The mystery of just turning an idea into an actual composition, a real performance, and getting those single special moments out of each person who is involved in the production. It’s the most thrilling adventure I could ever imagine. It’s like going out into space or something.”

Episode three delves into the publicity plots that have helped shape some of the world’s greatest artists. Narrated by Alan Edwards, the programme includes contributions and interviews with the leading PR himself. We hear how he and other major PRs, such as Barbara Charone and Andy Saunders, cultivate new bands, manage crises and attempt to maintain the reputation of their longstanding clients. They feature alongside artists Debbie Harry, Ozzy Osbourne, the Sex Pistols, Uriah Heep, Brett Anderson and Hugh Cornwell.

Alan Edwards says: “We all know what a significant role PR plays in British public life nowadays, but not many people realise that its roots go back five decades ago to the start of the music business as we know it now. In this film I lift the lid on the unseen, uncredited, often unappreciated and unsung PRs that helped create an industry that now employs something like 60,000 people.”

With unique revelations, unseen footage and unrivalled access, the programme tells the story of the rise of PR within the music industry, through the eyes of the people who lived it. The truth behind the headlines, and the stories you thought you knew, but really didn’t, are revealed. Plus, a look at how some of the most memorable rock and pop moments have been orchestrated by PR, and how the reputations of our ‘icons’ are created and destroyed by them.

Top of the Pops: The Story of 1981 is produced by BBC Music Television for BBC Four. Executive Producer is Mark Cooper, Head of Music TV, and Producer/Director is Matt O’Casey.