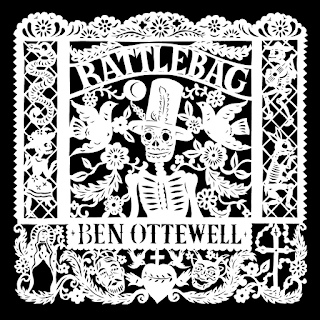 In his occasional column, SF and contemporary fiction author Neil Vogler highlights and champions creative works that he feels have been unjustly overlooked in our collective cultural memories. This time it's Ben Ottewell's Rattlebag....

Readers of AlbieMedia’s weirdo sister site /Garbage-File will know that over there I occasionally like to harp on about underloved and unjustly overlooked movies, TV shows or books in an irregular (but, come on, undeniably readable) column. I’m pleased to tell you I’ll be bringing my irregularity to this site now too – only over here I’m all about the music. I’ll be shining my light on audio gems that I think are worth your time, based on nothing but my gut instinct, my highly evolved sense of taste, and MY EMOTIONS, man.

Let’s start this column off with something eminently accessible and save the truly bizarre shit for another time.

Rattlebag came out in December 2014 and, as a fair-weather fan of Gomez who was somehow unaware of Ben's solo output, it came as a genuinely great surprise to find out that the man with the most interesting voice in the band had gone solo. I hadn’t listened to a Gomez album in years, and hearing Ottewell’s voice again was like getting reacquainted with an old friend I didn't even realise I was missing.

The record is a collection of eleven unfussy and beautifully performed tracks, all penned by Ottewell himself. Ostensibly a stripped-down, bare-bones, guitar-based affair, the production is all about servicing his unique vocals and pleasingly unshowy guitar style. This isn’t to say it’s an entirely mellow affair; whilst you could plausibly label this a chill-out album, it also has a raw edge that rears its head at unexpected moments and demands your attention.

It’s all about Ottwell’s voice. This guy sings and you listen hard, because he really means it. I’m not sure there’s anyone outside of the metal scene that has a more powerful set of pipes. Ben's voice is huge, distinctive and weathered – he fucking barks at you sometimes – and he's never less than totally compelling all the way through this record.

Broadly speaking the album is composed of acoustica, heavily influenced by Americana, and there are some beautiful songs on this album that gently work their way under your skin. Album opener Rattlebag sets the tone with a slowly building acoustic guitar riff that gives way to a song that could also be a mission statement for the entire album, as Ottwell makes a “Let’s do things better” plea amid rising guitars and a laid-back groove. And it only gets better; Patience and Rosaries sees Ottewell’s full-pelt voice employed to startling effect, and Stone, with its earworm riff and pleading main lyric, gets better every time I listen to it. They may be the highlights, but rest assured: there are no bad songs on this album.

I could be wrong, but I think there’s something of a self-healing quality to this record. Ottewell’s trying to figure himself out in his music, and luckily for us, his soul-searching makes for extremely good, pleasingly honest, reassuringly authentic listening. There are a million wishy-washy singer/songwriters out there moping into their mugs of tea and writing ballads that sound like piss-poor imitations of better songs – some of them are making pretty good coin from that approach too. But Ottewell, in my opinion, is head and shoulders above the current crop of chart-friendly, floppy-haired, emotionally unconvincing guitar-wielders. He writes good songs, he has a great ear for a melody, he doesn’t over-produce or over-sing anything, and he absolutely convinces you at every moment that he has lived this and this is it, the real thing, the world as he sees it.

I love this album; I’ve played it hundreds of times since I bought it, and I could go on about its merits for paragraphs. Why it hasn’t made more of a dent, gotten more airplay, or racked up huge sales is a baffling mystery to me. It’s an under-loved gem, and I urge you to check it out.