Review - Priscilla Queen of the Desert 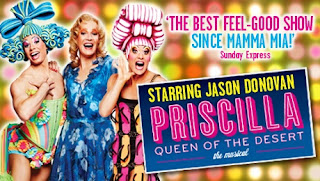 With Priscilla Queen of the Desert still fluffing its feathers around the world, Susan Omand remembers the last time she saw the musical...

If you've seen the 1994 film, starring Terence Stamp, then you know the basic story. For those that haven't, Priscilla is about three drag queens that drive across the Australian desert from Sydney, drag capital of the world, to Alice Springs in a bus (the bus is christened Priscilla, Queen of the Desert), each for their own life-affirming reasons. Bernadette, an ageing post op transsexual and ex Les Girls diva, is there in reaction to the death of her partner Trumpet - yes his name is explained in the show (ouch!), Felicia/Adam, the youngest of the trio and a "new style drag queen" who sings rather than lip syncs, wants to climb Uluru (Ayer's Rock) in full show girl rig out and sing a Kylie compilation at the top and Tick (aka Mitzi Matosis) is going to do a show... and to meet his six year old son for the first time.

Along the way they encounter homophobia, intolerance, compassion and love, all of which is dressed to the nines in feathers and sequins. And they find an unexpected ally in Bob, the mechanic.

This is a road/buddy movie turned into a musical. Yes, I was quite surprised too to discover that the film came before the stage show. I saw the musical in the West End when it opened in 2009 and have seen one other touring production of it since. Each has been very good and each has been subtly different. The touring stage set is, as you would expect, a very pared down version of the original production but it still manages to maintain a feel of the West End show with the "divas" descending from the ceiling to sing and Priscilla herself very much centre stage for a lot of the act.

Tick/Mitzi was played by Jason Donovan in a role that he has become very familiar and comfortable with, his ease with it was very evident. There were many allusions to Kylie and Neighbours in the script and he played up to the crowd very well. However, although he was the "big name" star of the show, I felt others in the cast outshone him. Graham Weaver (Adam/Felicia) was definitely the best singer and Richard Grieve (Bernadette) was by far the most believable in character. Bernadette could have been a 1940's film star like Katherine Hepburn because of the poise and grace with which Weaver played her. Indeed the dynamic between Bernadette and Bob the mechanic was very reminiscent to me of Hepburn and Bogart in The African Queen.

Of the ensemble cast, Miss Understanding (Alan Hunter) who opens the show is worthy of high praise. That Tina Turner impersonation will live long in the mind. The only part of the show, not just this production but every time I have seen it, that was a slight let down was the section just after the interval, wherein they get audience members up to dance to "Thank God I'm a Country Boy". The singing at that point was just not quite to the same standard and the whole section made the show slightly "pantomime" rather than showgirl.

All in all though it is great fun, high camp and feathery froth with a strong underlying message. I started singing along with the first verse of the first song and I don't think I stopped til the end, when I was slightly fearful of the balcony in the theatre collapsing because the place was bouncing that much.

If you love kitsch musicals, are up for a good time (and have a penchant for feather boas) this is definitely for you. I'll be finding pink feathers in unusual places for quite a while...