Exhibition - The Tomb of The Unknown Craftsman 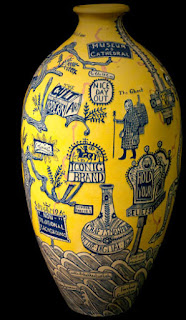 Susan Omand remembers a life-changing visit to the British Museum when she went to see Grayson Perry – The Tomb of the Unknown Craftsman a few years ago...

I had heard of the 2003 Turner Prize winning Grayson Perry before, of course, but not seen any of his work. I was not a fan of the man. To me, he was a shallow, egotistical, celebrity artist - media darling, English eccentric, “tranny potter” with his alter ego Claire and an unhealthy obsession with his teddy bear. With this media-born image in mind, I also had many negative pre-conceptions about this exhibition. Billed as a “memorial to all the anonymous craftsmen that over the centuries have fashioned the man-made wonders of the world”, I had visions of a self-indulgent display of his so-called artwork; the items displayed being classed as art only because he had put his name to them. However, my friend was keen to go and talked me into it by saying “It's crafts. You do craft fairs, don't you?” I do, so we went.

The exhibition itself was housed in the Reading Room, a round tower in the centre of the modern, glass-roofed Great Court of the British Museum, and, in hindsight, this was a great venue for it. Being part of the museum and yet separated from the main displays, it made the exhibition a stand-alone act in the midst of a bigger performance. So, having paid our £10 each, we climbed the beautiful winding staircase and were confronted by ... a motorcycle. A sugary pink and blue painted motorcycle, heavily adorned and ornamented, with a glass cabinet on the back, inside which sat a teddy bear on a miniature throne. The bear was Alan Measles* (or rather his teddy stunt double, as it was “unthinkable” for Perry to abandon the original for three months) looking for all the world like he was in some kind of Pope-mobile – the significance of which did not strike me until later. Anyway, it did very little to dispel my pre-conceptions.

Entering the exhibition proper, a darkened room with spot-lit cabinets and wall displays, the first item was one of Perry's signature large vases on a plinth entitled You Are Here. Walking round it, the decoration depicted modern, everyday people with speech bubbles saying things like “There was a real buzz about it on Twitter”, “I came to be outraged” and “I had a free ticket”. I began to realise that here was the work of a very astute man, who understands that the public visits museums and view art for very different reasons, some less highbrow than others. My mind started to open to his work and his ideas.

The next cabinet housed 3 helmets – the modern helmet that accompanied the garish pink motorcycle, decorated with a picture of Alan Measles, beside an ancient looking warrior helmet, grey with age but ornately decorated, and a horned, gold and fur confection that looked like it had come out of a child's dressing up box. I read the labels. The ancient looking one was of Perry's own making 30 years previously, with eyes moulded on the front, similar to ancient battle armour, but with an incongruous motorbike on the top. The horned wonder was part of the British Museum's own collection and really was an ancient ceremonial head-dress, from Ghana. I began to nod slowly and a smile spread over my face as I started to get what this guy was about. Here were three items, from the real to the imaginary, the ancient to the modern, all decorated in homage to perceived icons. I hurried to the next display, eager to discover more.

It turns out that Grayson Perry had been given free rein of the British Museum archives for over two years before this exhibition was mounted. He had chosen a theme of “Religion and Pilgrimage” and selected an eclectic mix of artefacts from Polynesian icons to 18th century maps which, intentionally or otherwise, echoed his own work in structure and meaning. There were several instances throughout the exhibition where I had to double-check the labels to see whether the artefact I was looking at was a real, ancient piece or if it was something from the imagination of Mr Perry. His own work in the show also spanned a broad range of media, not just ceramics, with drawings, textiles, sculpture and metalwork featuring heavily alongside his vases. 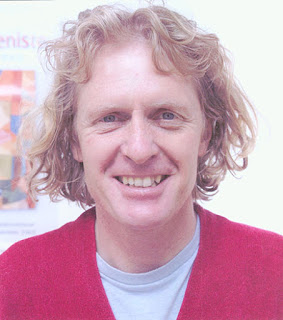 He also managed to connect seemingly disparate objects in this exhibition. One display was a denim jacket covered in badges depicting everything from CND marches, to the National Gallery – even the Euro '96 soccer tournament, all taken from the British Museum's archive. This was on the wall beside a small display of pilgrim medals, also from the archive – small metal objects and badges collected by religious pilgrims as mementos of visits to sites of holy significance. All tourist souvenirs then, in one way and another. It takes a special kind of mind to make (and convey) that relationship.

Since he is best known for his ceramics, I should mention the vases, for there were several in the exhibition. My favourite vase was definitely the one at the start, You are Here, because it opened my mind to the rest of his work, but another of note was The Rosetta Vase. I assume that the Rosetta Vase was thus named because it is meant as a decoder to modern life in the same way as the Rosetta Stone, housed elsewhere in the British Museum, was used to decode Egyptian hieroglyphics, thereby allowing the lives of that ancient civilisation to be better studied and understood by modern archaeologists. The vase was decorated with buzz-words and phrases that endeavour to encapsulate the contemporary world. If you only looked at the classical vase shape, the oriental motifs and yellow/blue/white colouring, rather than reading the actual words painted thereon, it would be easy to mistake this vase for an archaeological find and I expect this was the intention as, otherwise, I do not see why the work had to be presented in this way. The acute observational content of the piece would have stood up as an artistic work equally well on a flat clay tile, or even in a different media altogether.

My favourite piece of the whole exhibition was not, however, ceramic, but the huge and highly detailed tapestry called Map of Truth and Beliefs. It depicted many sites of pilgrimage, both religious and secular, showing the diversity of places where people gather to have a shared experience or to honour a shared memory – places of significance to them. These are clustered around a central pink circle of the ultimate destination for all pilgrims after death in all its various guises – the after-life, Astral plane, Nirvana, Valhalla et al. There is just so much going on in this work, and so many small combinations that make you stop and think a bit. For example, Nashville and Graceland were mixed with Stonehenge and Bethlehem in one corner. A picture of skyscrapers was labelled as Mecca. Poignant places of human tragedy, such as Robben Island, Hiroshima and Flanders, were given equal weight with Las Vegas, Sturgis and Silicon Valley. All this against a backdrop of yellow skies filled with planes and helicopters which gave the whole piece a dramatic, war-torn quality. I found the piece as a whole to be profound, almost shocking in its presence, and a true work of art as well as being a damning indictment of contemporary society.

The concluding centrepiece of the exhibition, occupying a large piece of floor space, was a boat, and what a boat it was. A richly decorated galleon made of cast iron, this was a funeral ship evocative of those used by the Vikings to bury their dead. Deliberately empty, it was adorned with lots of small items, pots, relics and objects relating to craft and craft makers, both meant as offerings to the gods and for the incumbent to use in the next world. This was, indeed, the Tomb of the Unknown Craftsman – a homage to all those forgotten hands that made everything now housed in the museum and beyond.

I left the exhibition feeling like a changed person, inspired and enlightened, with a new way of seeing modern life and its connections to the past and to itself. Even the pink motorcycle now made perfect sense. Alan Measles is a god to Perry, a religious icon, the centre of his imaginary world, and he should be transported as such, in an ornate glass case held high on a chariot. In conclusion then, I encourage you to see beyond the wigs and the dresses, the bonnet and the moth-eaten teddy bear. Grayson Perry is a very clever and insightful artist who has created and curated a sharply observed and thought-provoking exhibition.

*Apparently Alan Measles was named after the boy next door and a memory of a bad bout of measles in 1963.