Review - Whose Line is it Anyway 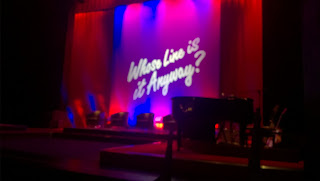 A review of the live version of Whose Line is it Anyway, performed in the style of a country and western hoedown by Barnaby Eaton-Jones...

For a limited two-week run, the popular television improvisation show is revived on stage some 15 years since the last UK edition was broadcast on Channel 4, with the same format, the same host and some of the regular performers. I suspect, outside of London (home of The Comedy Store and The Comedy Store Players), this would be most people's experience of the art of 'making it up as they go along'.

You would think, because it was a matinee, that the energy might not be there, they might be coasting due to the evening's performance or that the audience might not guffaw as loudly. Well, you'd be wrong in thinking all of that. From the moment that Clive Anderson literally leaps onto stage, a bundle of nervous and highly-strung energy, the pace doesn't let up one bit. He delivers a fantastic warm-up, introduces each guest performer with a little interview, and has a little banter with Laura Hall and Linda Taylor (both exceptional musical stalwarts from the USA series of the show, providing the off the cuff soundtrack to anything and everything).

The familiar font of the title is there for all to see, emblazoned on a screen at the back of the stage, and the chairs, tables with jugs of water, and desk at the side for Clive to run proceedings from is all very much present and correct. If you knew it from television, this was as close as you were going to get to travelling back in time to attend a live taping.

Josie Lawrence, Greg Proops, Brad Sherwood and Colin Mochrie are the four improvisers using their quick wits, character skills and comic teamwork for the duration of the run. All four are veterans of the broadcast version of the show and for doing stage work too, often bringing the house down with a broad pun, a well-timed bit of face pulling or even – in Colin's case – a simple shrug of the shoulders.

The show began with 'Questions Only', which is always good for a warm-up, where all the peformers can only speak in questions; which is harder than it sounds. It's clearly apparent that all four performers are having a ball. Clive Anderson is much more animated than his television straightjacket suggests and his mock-hatred of Greg Proops proved a battle of one-upmanship that had the audience in stitches (Greg's most biting comeback, when Clive mocked the Americans for not understanding English words, was that 'foreskin' in the USA is traditionally known as an 'Anderson'). There's a proper feeling of a show building in both halves to a climax of amusement, as bits are referenced from previous games and you can see the fear and delight in the performer's faces as they engage the audience as much as each other. The games that always work the best are those with volunteers from the paying punters and there was no shortage of people desperate to get on stage and help out in a game. Of course, they always became the butt of the joke, in an affectionate way, and that's what made it all the more funny.

Even the inevitable mistakes were side-stepped or referenced beautifully, such as when Brad Sherwood sang a hilariously off-topic song to a lady from the audience who said she was a 'jeweller' in a strong London accent. He misheard this as 'Doula' and sung about her child-bearing hips, getting her pregnant and afterbirth (for those that don't know, a 'doula' is an unqualified birthing assistant – like a midwife who hasn't taken her exams!). It wasn't until the second half that he apologised, very amusingly, for this mistake and then referenced it from there onwards.

The thing with an improvisation show is that it never runs out of jokes. Sketches are kept to a pretty good length, by usage of Clive Anderson's buzzer, and the performers are then on to a new topic, scene or characters. The only bum note seemed to be Josie Lawrence's quite obvious frustration for an initial suggestion of 'ISIS Headquarters' for the suggestion 'Somewhere You Would Feel Uncomfortable Being'. Obviously, the audience picked up on this as a comic suggestion for anything that needed shouting out but Josie's increasing annoyance and vocal disdain killed it off before the interval. Understandably, with the atrocities that have happened recently, it's not something she felt comfortable with but – as many comedians would say – the best way to talk about what scares us, angers us or that we're all in unison on is by making fun of it. Satirical and topicality wasn't ever something that troubled 'Whose Line Is It Anyway?' in its television run and they were obviously keen to stick to the formula here.

But, this is picking on something minor in a show that was full of major moments. To see the life of audience member and truck driver Clint - who came from Indiana, liked riding motorbikes and who's dream was to be a comedian - realised as a West End musical in the style of 'Les Miserables' was an experience too good to miss. There were frequent and sustained belly laughs throughout, not a weak link in the show in regards to peformers, and Clive Anderson was on top form with his brand of edgy sarcasm.

The theatre was packed, the love was all around, the laughter was non-stop and the sheer marvel at seeing someone like Brad Sherwood rap about an albino leopard and the fact you need to stand still to have a 45% chance of not being eaten is worth the price of the ticket alone.

If you get the chance, grab yourself a ticket before the run ends. I promise you won't be disappointed. Definitely, 5 out of 5 stars.

Image - Barnaby Eaton-Jones
'Whose Line Is It Anyway?' runs at the Adelphi Theatre, London, until Saturday 5th July; with tickets from £20 to £47.50. You can book here: